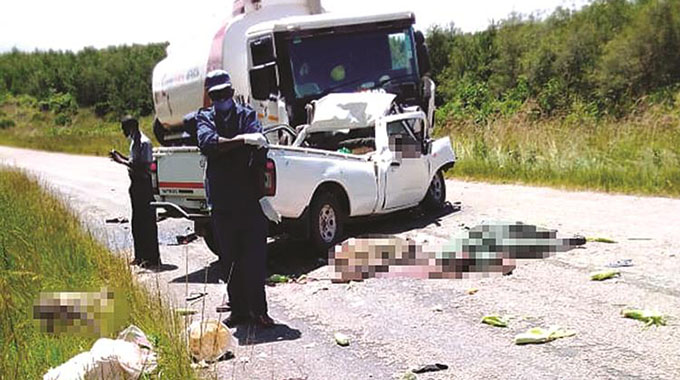 Seven people died, four of them Zimbabwe Prisons and Correctional Services officers, when a ZPCS truck collided head-on with a fuel tanker along the Mutare-Nyanga highway on Friday, 5 March 2021.

The Zimbabwe Republic Police (ZRP) has released the names of thirteen accident victims who died in two separate road accidents which occurred in Manicaland and Mashonaland Provinces on Friday.

Seven people died in Manicaland when their pick-up truck collided head-on with a fuel tanker at the 67km peg along the Mutare-Nyanga Road.

Four of the victims were Zimbabwe Prisons and Correctional Services (ZPCS) officers while two were civilians and the other victim an inmate.

Two other inmates survived the fatal accident and are currently at Bonda Mission Hospital.

In the separate accident that occurred at the 135km peg along the Harare-Mukumbura Road, police said five victims have so far been identified. National police spokesperson Assistant Commissioner Paul Nyathi said:

One of the victims has not been identified so far.

The accident occurred after a motorist who was driving a BMW motor vehicle towards Mt Darwin struck and killed six people.