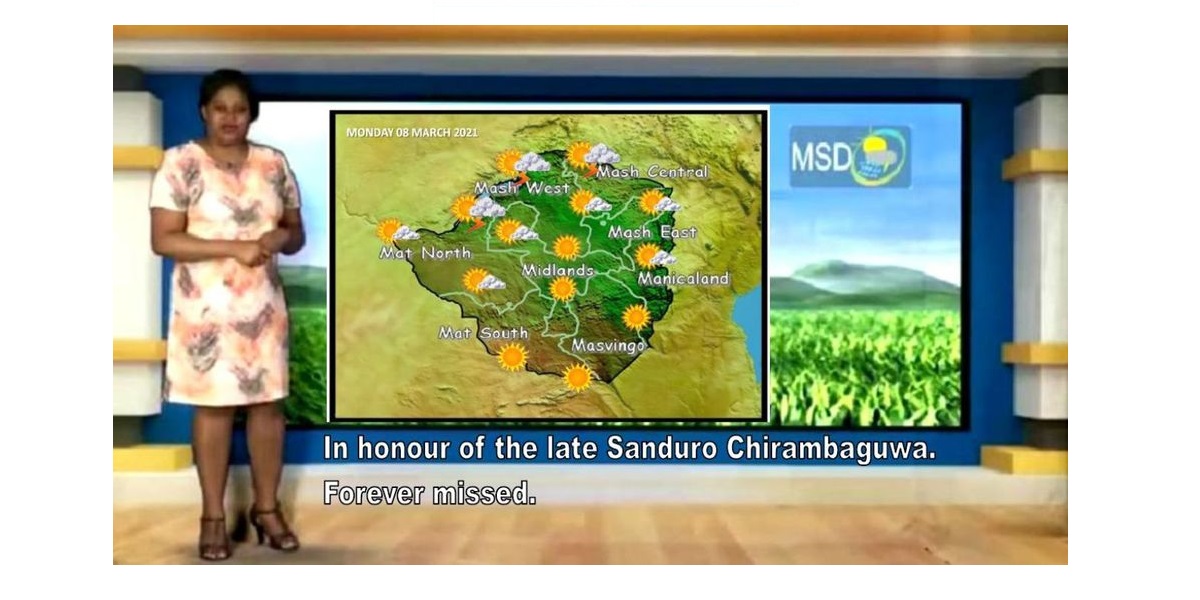 The Meteorological Services Department (MSD) forecaster, Sanduro Chirambaguwa who used to present Weather reports and forecasts on ZTV has died.

MSD did not reveal when and how Sanduro Chirambaguwa died but dedicated its latest weather update to the late presenter. It said:

A special edition of the Weather Report and Forecast… in honour of the late Sanduro Chirambaguwa.

Meanwhile, the MSD has issued a weather report and forecast which is valid until Tuesday 09 March 2021. The department noted:

Guruve measure 30 mm as the odd downpour: while Karoi and Mount Darwin had 13 mm and 12 mm respectively, representing the upper limit of most rains experienced in all Mashonaland Province and Manicaland Province. The rest of the country was mostly sunny and warm as the atmosphere continues to dry off from the south.

Districts such as Kariba, Hurungwe, Guruve, Muzarabani, Mount Darwin, Rushinga, Shamva, Bindura, Mazowe, Zvimba into Makonde, should be mostly sunny and humid at first becoming cloudy by afternoon with isolated thunderstorms and light rain. Scattered clouds are expected over the rest of the areas in the Mashonaland Provinces and Manicaland Province where it should be mild at first becoming warm by afternoon. The rest of the country (Matabeleland North, Matabeleland South, Bulawayo Metropolitan, Midlands, Harare Metropolitan and Masvingo Provinces) should be mostly sunny and warm by noon becoming mild towards evening.

• Day-time temperatures are expected to steadily rise as the week progresses.

• Thunder can still strike from a distant cloud (This is commonly called a ”bolt from the blue”).
• Keep hydrated: ensure you drink lots of water from protected sources.

• Poultry producers should note that broilers are sensitive to temperature variations and therefore need to be checked regularly and adjustment made.

Brief cloudy periods are expected along the Zambezi Valley into the northern parts of Mashonaland West and Central Provinces. Light showers remain probable due to remnant moisture. Provinces such as Mashonaland East, Harare Metropolitan, Manicaland, Masvingo, Midlands, Matabeleland South, Bulawayo Metropolitan and Matabeleland North should be warm by day and mild towards evening with mostly sunny conditions.