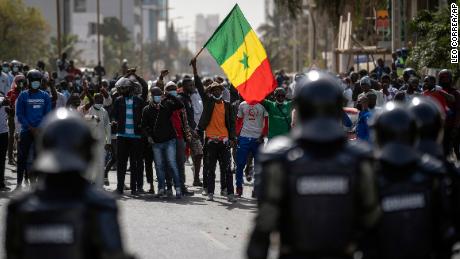 Protests are reportedly rocking the West African nation of Senegal after authorities arrested the country’s leading opposition leader, Bloomberg reports. The Senegalese government reportedly shut down the internet and some TV stations over the raging protests.

According to U.K’s  NetBlocks, a system that tracks Internet disruptions globally, metrics show that Facebook, YouTube, WhatsApp, and some Telegram servers were restricted on Orange/Sonatel as of early morning Friday.

The country’s National Audiovisual Regulatory Council reportedly also suspended 2 TV stations yesterday for 72 hours after they covered the protests and warned them against broadcasting content that could threaten national stability.

The protests that entered their third day today were ignited by the detention of 46-year-old Ousmane Sonko, one of the government’s loudest critics who was arrested for disturbing public order.

The protests reportedly broke out as Sonk was heading to court to answer a separate rape case. He was reportedly accused of rape last month by a beauty salon employee and summoned to be arraigned in court after his parliamentary immunity was lifted last week according to the publication.