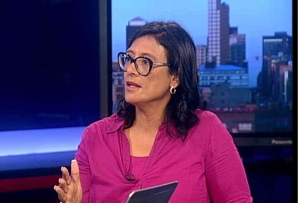 eNCA journalist Karima Brown has died, Newsday reports. According to the publication, Karima died shortly after contracting the Coronavirus on Thursday( 4 March) morning and she will be buried at a private cemetery on a date to be announced.

Karima Brown’s death was announced by eNCA after her family confirmed the death in a statement that said:

It is with deep sadness that we inform the public that our beloved sister and mother, Karima Brown, passed away this morning. She died from COVID-19 related complications.

Karima was not just a prolific and well-known South African journalist and commentator, with deep footprints in print and broadcast media, but also and more importantly a well-loved friend, mentor, mother, colleague, daughter, and confidante to countless people throughout a life lived fully, and with a deep commitment to her most cherished values and principles.

Brown hosted the show “The Fix” on eNCA she had been in hospital  where she had been admitted after contracting COVID-19. South Africa has downgraded their lockdown to level 1 as they have successfully managed to contain the second wave of the virus.