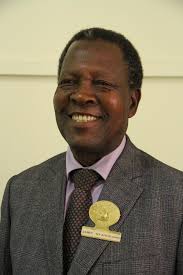 There was drama at Chief Nyamukoho (birth name Samson Mapereke Katsande) ‘s funeral as some of his grown-up children reportedly refused to attend the funeral as they feared they will be arrested, Newsday reports.

A source privy to the developments stated that the children refused to attend the funeral due to their sour relations with their stepmother, Chief Nyamukoho’s widow.

The children refused to be part of the funeral, citing a number of reasons and making numerous accusations against their stepmother.

The chief’s children said they were served with a protection order by their stepmother, hence they feared to be arrested if they set foot at the funeral. However, this is just part of the estate wrangle. It is a pity that these children have proved to behave like this.

The publication shed light on the eventualities that might have led to the sour relations between Chief Nyamukoho, who was suffering from dementia, ‘s wife and his children and said:

After their father’s condition deteriorated, his children reportedly tried to elbow out their stepmother as the estate wrangle began. The fight saw the children approaching the courts where one Motsi Munyoro was appointed the curator to the late Chief Nyamukoho’s estate.

The estate wrangle resulted in Chief Nyamukoho and his wife becoming paupers despite that they owned vast properties across Zimbabwe.

Chief Nyamukoho was a senator for years before he resigned due to health reasons. He died last week aged 81 and he was buried on Monday.