Jealousy Mawarire and Linda Masarira have clashed over the role which should be played by Women’s groups in the case of Vice President Kembo Mohadi who allegedly slept with his married subordinates.

Jealousy Mawarire has urged organisations representing women to step up and represent the women which VP Kembo Mohadi allegedly slept with saying the 71-year-old abused his power and office.

Meanwhile, Linda Masirira who leads opposition LEAD opines that the women in question are adults who made their own decisions therefore Kembo Mohadi has no case to answer.

Responding to a tweet that spoke about Mohadi’s affairs, Jealousy Mawarire who is the spokesperson of the National Patriotic Front (NPF) said:

I don’t know why women’s groups are quiet, it’s worrying.

Hanzvadzi yangu (my brother) Jealous how are you? This woman is an adult who has willingly consented to sex, what are women’s groups and gender activists supposed to say? 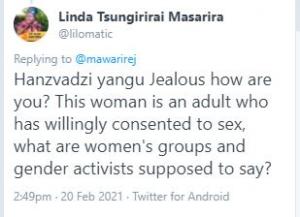 Mawarire did not agree with Masarira. He suggested action must be taken against the Vice President. He responded to Masarira’s tweet:

I have seen, countless times, women groups condemn bosses who hit on subordinates, Morehardy hit on Abigail, a subordinate & subordinate’s wife. Are u saying women’s groups should turn a blind eye to men abusing their power & offices to solicit for sex from juniors? Am dissapointed

Some social media users who followed the discussion suggested that women’s groups were showing double standards after they rebuked Nelson Chamisa, leader of opposition MDC Alliance who had only grabbed a microphone from his wife whilst she was still speaking at a rally.
Meanwhile, some said it was difficult to say they were abused as some women just cheat on their husbands by choice.