Permanent Secretary in the Ministry of Information, Ndabaningi Nick Mangwana

The Secretary of Information, Nick Mangwana, has defended Vice President Kembo Mohadi who is being accused of having affairs with his married aides saying they are adults who consented to sleep with him.

He was speaking after some had suggested that Mohadi was abusing his power and office to sleep with his married aides. Mangwana said: 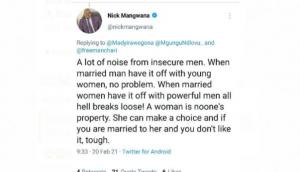 Indeed. That applies to me too as a man who has been married for a good 28 years. With so many married years under the belt, I surely know what I am talking about. If my missus was to cheat on me, that’s between me and her. Not the third party unless he raped her.

Choice is at the heart of progressive feminism. A woman should be able make an informed choice and give an informed consent, just the same way as a man.

Yes. When one breaks a marriage vow, you break it between yourself and the one you married. Not with everyone else out there. Eveyone else should stay in their lane and allow families to deal with their challenges.

Previously, Jealousy Mawarire, the spokesperson of the National Patriotic Front had suggested that the married aides had no way they could have denied Mohadi what he had asked for since he was their superior. Responding to Mangwana’s post, Mawatire said:

I don’t think you deny the likelihood that if Morehard wasn’t VP, the CIO guy, whose wife he is bonking, could have given him a thorough hiding. Morehardy didn’t just abuse his power on the female subordinate, he also used his power to take a junior’s wife, it’s unacceptable.

He called for women’s organisations to take action against Vice President Mohadi.

One Comment on “Mangwana Defends Mohadi Affairs With Married Aides”