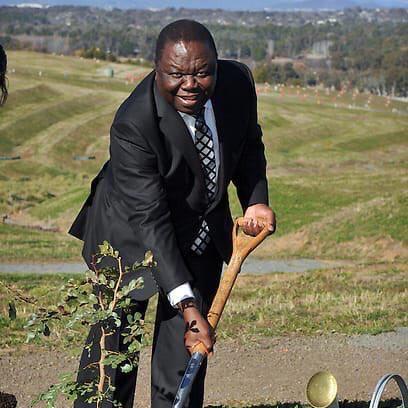 Tsvangirai, a former trade unionist and Prime Minister of Zimbabwe during the inclusive government (2009-13), died on 14 February in 2018 after a long battle with colon cancer.

MDC Alliance leaders have paid tribute to Tsvangirai, describing him as a champion for freedom whose calmness and bravery in the face of hostility was unparalleled. Party leader Nelson Chamisa said via social media:

Today is MRT day: We lost a peacemaker and freedom champion. My father, mentor and a friend, I salute u for the free leadership tutorship.

You taught me love, forgiveness, humility and loyalty. I will never be purchased to compromise. We will WIN Zimbabwe for change! Rest in Power Mdara!

On 14 February 2018, we lost the founder and doyen of our struggle Morgan Richard Tsvangirai. His bravery and calmness in the face of hostility were without equal.

We shall forever remain indebted to your pioneering leadership. We vow to finish off what we started. #RipSave

MDC Alliance national spokesperson Fadzayi Mahere applauded Tsvangirai for paving the path for a sustained struggle for democracy in Zimbabwe. She said via Twitter:

Rest in power, Morgan Tsvangirai. Thank you for forging the path and blazing the trail in the struggle for democracy. We remain inspired by your courage in standing up to the beast of dictatorship and for imagining a democratic Zimbabwe.

The people know their heroes.

Before his death, Tsvangirai worked for the formation of a broad-based opposition alliance to take on ZANU PF in the 2018 general elections.

This culminated in the formation of the MDC Alliance, whose presidential candidate, Nelson Chamisa, won over 2 million votes, a feat the late Tsvangirai never achieved when he contested for the presidency in 2002, 2008 and 2013.