The national executive of the opposition MDC Alliance met virtually on the 12th of February to deliberate on the country’s state of affairs, including state capture. Below is a report on the meeting:

On the 12th of February 2021, the National Executive Committee of the MDC Alliance met in accordance with the party’s constitution. The meeting was conducted virtually in line with Covid19 protocols. The Executive received the report of the National Standing Committee and the following matters were deliberated upon:

1. Elite State Capture: The Executive expressed its concern over the prevalence of cartels in the national economy and the correlation between these and rising cases of corruption that are prejudicing the fiscus of over US$3 billion annually. We call for the establishment of an independent inquiry into the allegations of Elite State Capture against top political elites and Zanu PF factions with a view to ensuring accountability and the creation of a shared, inclusive economy.

2. Agricultural Season: The Executive considered the mounting challenges with the agricultural season — in particular, the impact of increased rains and flooding, the lack of adequate funding as well as the absence of preparation models that could mean the good rains go to waste. We urge the adoption of the party’s SMART Agriculture blueprint to move the nation from basic subsistence farming, improve productivity and attain a food surplus.

3. COVID-19 Response: The Executive urged the State to adopt the party’s alternative Covidl9 Response Plan that was recently enunciated by President Nelson Chamisa. In particular, there is need to take into account the livelihoods crisis and mass poverty afflicting most Zimbabweans who rely on the informal economy for survival as well as the prospect of evidence-based zonal lockdowns. We further recommend that the Government publishes its vaccination roll-out plan to ensure transparency and a science-based approach to the planned inoculation.

4. Governance Crisis: The Executive deliberated on the increased levels of repression, the regression of democracy, authoritarian consolidation and persecution of members of the party, journalists and dissenting voices. The party condemns the closure of democratic space, human rights abuses, wanton arrests and demands the immediate release of student leader, Alan Moyo.

5. 3rd Memorial Anniversary of Morgan Tsvangirai: The Executive acknowledged the 3rd anniversary of Morgan Tsvangirai’s passing. The Executive remembered the role he played in the fight for democracy, his inspiration to the next generation and his historical contribution to a better Zimbabwe. The party takes note of the existing threats to his vision to build an uncompromised, credible and viable alternative government. The party resolved to defend and be the guardians of his legacy and to fulfil his aspiration to win Zimbabwe for change.

6. `Agenda 2021′ Program of Action: The Executive noted the continued attempts by Zanu PF to supplant the MDC Alliance as the credible democratic alternative to their current misrule and the attempts to reconstitute an opposition that is captured, loyal to ZANU PF and a de facto extension of ZANU PF. The MDC Alliance remains committed to the need to push for a political and economic reforms roadmap that is time bound. The Executive resolved to continue to champion the cause of the Zimbabwean people, be the legitimate voice of the suffering masses and form a broad front to return the country to legitimacy and democracy. The party’s `Agenda 2021′ program of action will be announced in due course.

B. Continental and Global Matters

1. Uganda: The Executive deliberated upon the election outcome in Uganda and expressed concern over rising human rights abuses and state-sponsored violence perpetrated against members of the opposition. We call upon regional bodies to reject the outcomes of rigged elections and act in conformity with established African Union standards for elections. We urge the courts in Uganda to act fairly and impartially in their determination of the election petition.

2. Ghana: The Executive took note of the electoral dispute in Ghana. We call upon state institutions to be professional and fair in resolving the outstanding issues.

3. United States: The Executive acknowledged the election outcome in the United States and underlined the importance of predictable processes and strong institutions in ensuring a legitimate transfer of power.
Fadzayi Mahere National Spokesperson
Change That 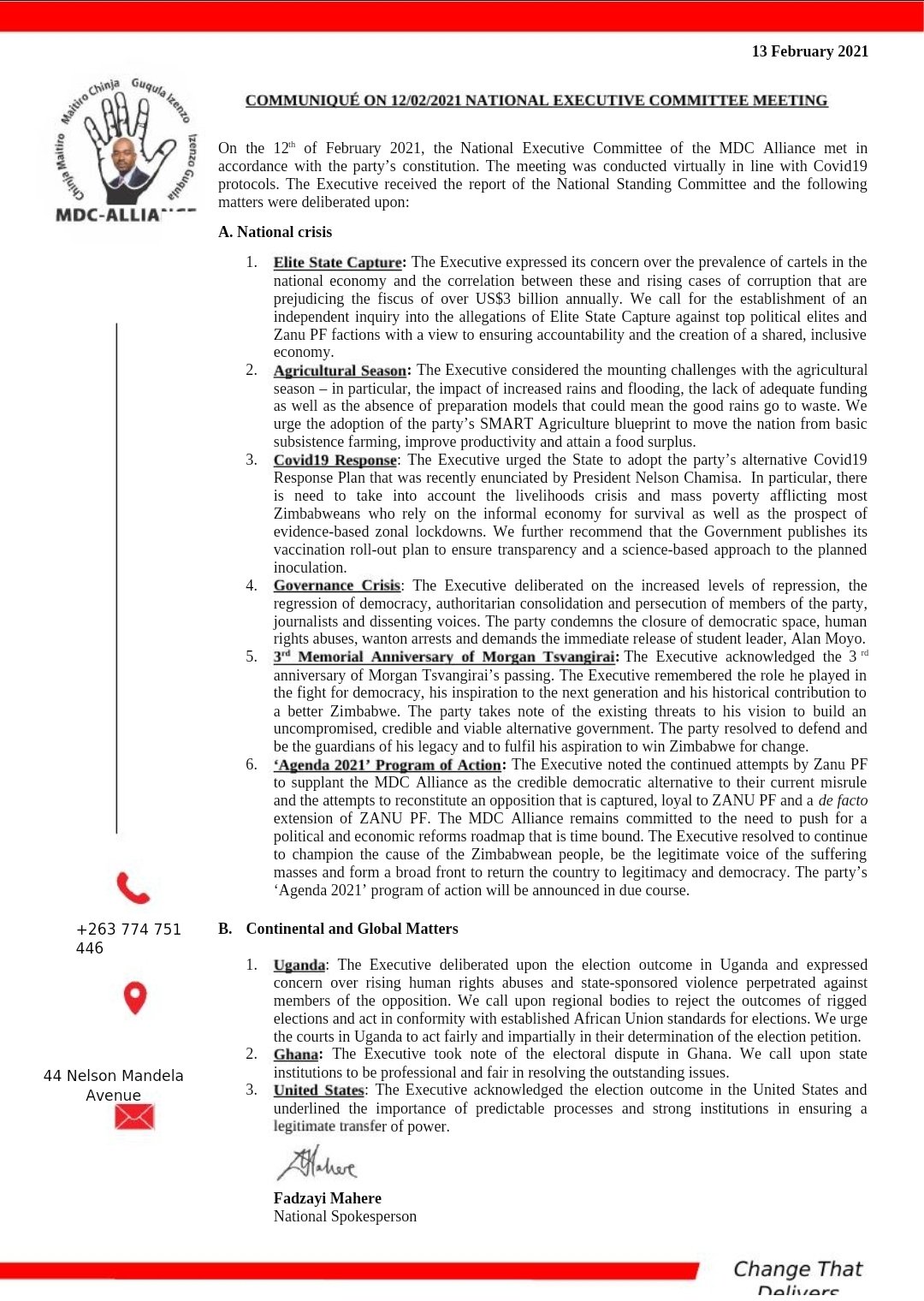