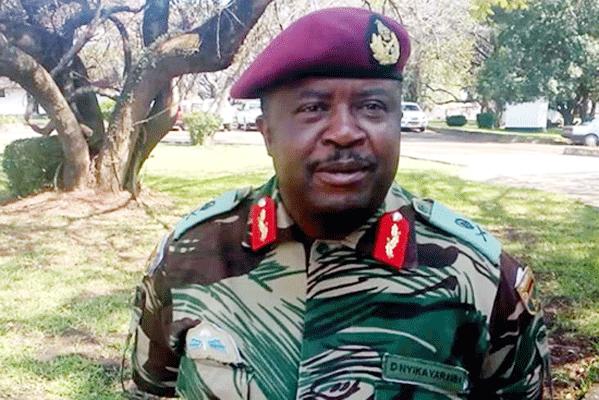 Zimbabwe’s ambassador to Mozambique, Lieutenant General (Retired) Douglas Nyikayaramba, late, reportedly played critical roles during the violent 2002 and 2008 presidential elections both won by the then president, the late Robert Mugabe.

Below is a Twitter thread by NewsDay on the highlights of Nyikayaramba’s post-2000 electoral and military career:

Major-General (Retired) Douglas Nyikayaramba is a former Chief of Staff, Administration at the Zimbabwe National Army.

He was listed as a beneficiary in the 2007 RBZ Farm Mechanisation Scheme under the thematic group “Political Referees: Commissions”, and he got a loan totalling to US$169,972 which he never repaid.

Under Mugabe’s “Boys on leave” policy which saw Nyikayaramba among top security chiefs reassigned to key strategic institutions to flush out or neutralize top officials sympathetic to opposition politics from the system.

At the time he was said to have retired but bounced back at army headquarters where he was reassigned to drive “Operation Maguta” working together with Grain Marketing Board.

He again went back to Army before he led a “Mugabe back in office bloody Campaign in March 2008 after the late former leader was defeated in a presidential election by opposition MDC-T leader Morgan Tsvangirai.

Tsvangirai pulled out of the rerun to stem the bloody presidential rerun. Nyikayaramba was to be appointed Chief of Staff at the army headquarters.

Nyikayaramba reportedly retired from the army to become chief elections officer at the then Electoral Supervisory Commission (now Zimbabwe Electoral Commission) in 2002 and 2005 elections and returned as commander of 3 Brigade in Mutare after his “mission” at the elections body had been accomplished.

Nyikayaramba was credited for having played an important role in ensuring a win for late former President Robert Mugabe in the 2002 presidential elections.

Nyikayaramba reportedly forcibly occupied late MDC treasurer-general Roy Bennet’s Charleswood Estate. Bennet had reported bought the farm in 1982 after the government had issued him with a certificate of no present interest.

But when Bennet returned to the farm to collect his late father’s ashes Douglas the opposition leader was arrested.

In October 2016, as Chief of Staff Administration, giving oral evidence before a Parliamentary Portfolio Committee on Defence and Security Nyikayaramba, said the country’s economy was not growing and was bleeding because of corruption by some senior government officials.

In September 2017, while addressing an audience of traditional chiefs in Masvingo Nyikayaramba said then President Mugabe should not be forced to resign due to old age. He went on to say Mugabe’s leadership was endorsed by the country’s spirit mediums and religious prophecies.