The Zimbabwe National Army has dismissed as false reports which suggest that its members were deployed and severely assaulted members of the public in Humani area in Mberengwa West where minister July Moyo comes from. In a statement, the ZNA said:

The Zimbabwe National Army would like to dispel allegations that its members severely assaulted villagers in Humbani area, Mberengwa West, following a break-in at the homestead of Local Government Minister July Moyo last month.

The false article was published by NewZimbabwe.com whose reporters never sought to verify the facts from the army authorities or the police but quoted some anonymous sources for their story. The fact of the matter is that the Army does not have any of its soldiers deployed in Mberengwa. The Army does not in any way investigate cases of theft and burglary.

The theft and burglary at the Minister’s homestead some two weeks ago and the Zimbabwe Republic Police reacted accordingly. Investigations are underway to apprehend the culprits.

The local residents who supposedly spoke to NewZimbabwe.com on condition of anonymity are also suspects who merely want to divert the attention of CID investigators from the case and in the process are soiling the good name of the Zimbabwe National Army.

As for the Beitbridge news story which was published by the NewsDay on 01 February 2021 wherein it is alleged that army Commandos beat up police, the NewsDay newspaper story is also a complete fabrication based on the reporter’s imagination.

Members of the Army and Zimbabwe Republic Police are carrying out joint operations together with personnel from Zimbabwe Revenue Authority and the Immigration Department.

As clearlypointed out by the Officer Commanding Beitbridge District, no such incident ever occured. Equally so, the army has not received any reports pertaining to such an incident.

The Army would like to warn members of the pubic, especially some of those criminal elecments who ply their illegal activities in an around Beitbridge that the law will soon catch up with them. The security forces authorities re well aware of some malcontents who are trying to besmirch the operation in particular and the good image of the security forces, general. Their futile and criminal machinations to discredit the operation will not succeed. 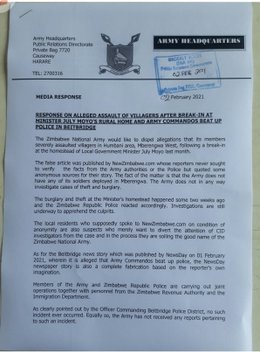