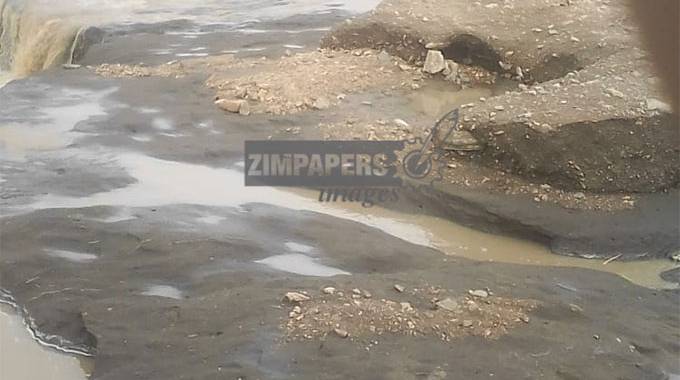 The broken bridge before the truck was swept away

Two men spent the night perched on top of trees in the Mtshabezi River after their Nissan Truck was swept away as they attempted to cross the flooded river.

The incident occurred at around 1 AM in Siyoka area some 100km west of Beitbridge town and the two, who are yet to be identified, have been on top of trees since then.

The bridge at the point on which the incident occurred is partially broken and the Rural Development Committee said that it was working on getting a contractor to repair the damage.

A villager from Siyoka, Morris Mhlanga, said villagers were afraid of attempting to rescue the men as the water levels continue to rise. He said:

The two were travelling towards Madzivhe area when the truck was swept away off a damaged bridge.

We are still on the scene waiting for help and our worry is that those trees might be swept away as water levels continue to rise.

Meanwhile, District Civil Protection Unit chairperson, Sikhangazile Mafu Moyo said a rapid response team will soon be dispatched to the scene and a military helicopter could be called in if there is a need for that.