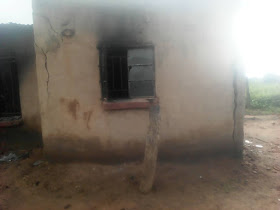 A 60-year-old widow from Mwenezi recently lost all her meagre assets after a fire gutted her house while she was working in the fields.

Margaret Kamwemvura, of village 10 Liburgia under Chief Neshuro, told TellZim News that the fire incident occurred on 25 January this year.

Kamwemvura suspects that her son’s cellphone which was on charge might have exploded resulting in the fire. She said:

One of my sons left his phone charging with a universal charger so it seems the battery exploded and caused the fire.

We had left home for the fields when the accident occurred and we were only alerted about the fire after we had seen thick smoke blowing from the direction of our homestead.

We then got home to find that everything had been destroyed and nothing was recovered including my cellphone which I had left inside the house.

All our entire belongings were destroyed as this was the only house that sheltered everything for us. We are only left with the clothes on our bodies and nothing else.

Kamwemvura lives with her two unemployed sons and she can be contacted on her grandchild Prince Hove’s mobile number 0777111013.