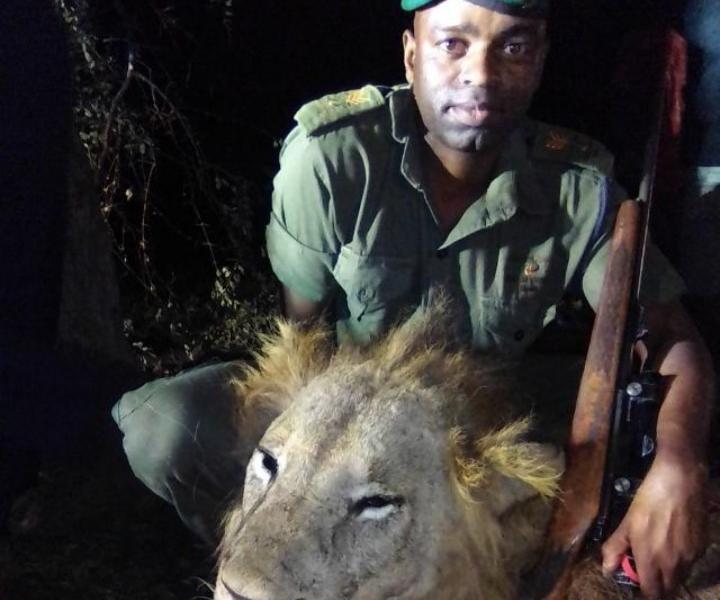 Sergeant Mavhuni with the dead lion

A stray lion which had killed seven cattle and spread panic in Triangle has been killed by a professional hunter hired by Tongaat Hulett Zimbabwe (THZ).

The male lion, first spotted on 15 January, was shot dead by a professional hunter working with THZ game rangers.

According to a memo dated January 15, the lion’s spoor was tracked from Section 8 right into Triangle’s business centre before the predator was shot at sugarcane Plot 1801 of Section 26. The memo read in part:

Employees and all members of the community are strongly advised to keep away from the hill and avoid unnecessary outdoor movement on foot within the Triangle Area until the animal has been accounted for.

Reports indicate that the hired professional hunter took less than 24 hours to track and contain the predator at around 1900hours in a cane field.

A source told TellZim News that the hunter had no intention to kill the lion but feared he could lose track of it due to heavy rains currently pounding the area and also there were fears that it could end killing people.

In a post on Twitter on Monday, Zimbabwe Parks and Wildlife Management Authority (Zimparks) spokesperson Tinashe Farawo confirmed that the lion had been taken care of. He wrote:

The lion which had killed at least 7 cattle in Triangle has been eliminated.