Zanu PF has taken a jibe at US Ambassador to Zimbabwe Ambassador Brian A Nichols and other “local and international” critics for what they called their “deafening” silence at the protest that occurred in the US Capitol Hill on 6 January 2021.

The revolutionary party, ZANU PF, has observed and noted with keen interest the acquiescing reaction of the usual rabid commentators on the recent mayhem and chaos which engulfed the heart and soul of American democracy, the Capitol Hill. As is now in the public domain, hooligans nearly achieved the, intended insurrection by attempting to disrupt a constitutional process meant to pave way for the smooth transition to the inauguration of the 46″ American President-elect Joe Bitten.Despite the occurrence of these ugly scenes, the revolutionary Party takes this opportunity to wish President-elect Joe Bitten a fruitful term of office as we both attempt to pursue matters of mutual interest for our people.

The revolutionary party, ZANU PF, is however taken aback by the stony silence of the so-called impartial local and international commentators who usually masquerade as governance experts in such matters. One would have thought their usually excitable ire would have been cajoled into solos by condemning these grotesque acts of hooliganism and vandalism. Had it not been for the value of the USA security forces, the consequences could have been ghastly to contemplate.

One shudders to think what could have happened in the Third World if any contestant to a political office had failed to concede defeat as happened in the USA in the numerous elections which have been held to date. Further, one would have expected the normally outspoken USA Ambassador to Zimbabwe, Brian Nichols to lambast these anomalous events in his native country. Ambassador Nichols’s now open hypocrisy where he negatively postures actions by other sovereign states’ security forces as wayward in their attempt to bring normalcy and order in their jurisdiction deserves repudiation and scorn. We all expected him to at least, comment on the actions of these hooligans and vandals, and the subsequent interventions by that country’s security forces. the unsavory actions in the US. should serve as a lesson to the likes of Ambassador Nichols that the often lauded so-called lofty democratic credentials of his country are Just but a mere illusion that has been exposed for its fallacious nature and grave shortcomings. Suffice A say, all democratic models being pursued by different counties need continuous and consistent refinement.

At this juncture, it is critical that we remind Ambassador Nichols and his like-minded acolytes for the umpteenth time that it is a sacrosanct rule in diplomacy A always tread with utmost carefulness when commenting on sovereign issues regarding other countries.

Now that the ball of chaos is in Ambassador Nichols’ courtyard, rabidly thrusting eggs on his face. We await for his views. Even his local lackeys have been caught naked leading to an unusual graveyard silence.

Having pointed out those anomalies which we expect the usual detractors to self-introspect and take corrective action, the revolutionary Party, ZANU PF, wishes the American people and its President-elect Joe Biden success on his forthcoming term of office which begins after his inauguration on 20 January 2020.

In conclusion, given our existing cordial relations with the USA, we look forward to the new USA administration to remove the illegal sanctions imposed on Zimbabwe.

Last year Zanu PF attacked Ambassador Nichols and called him a thug before threatening to expel him from Zimbabwe. 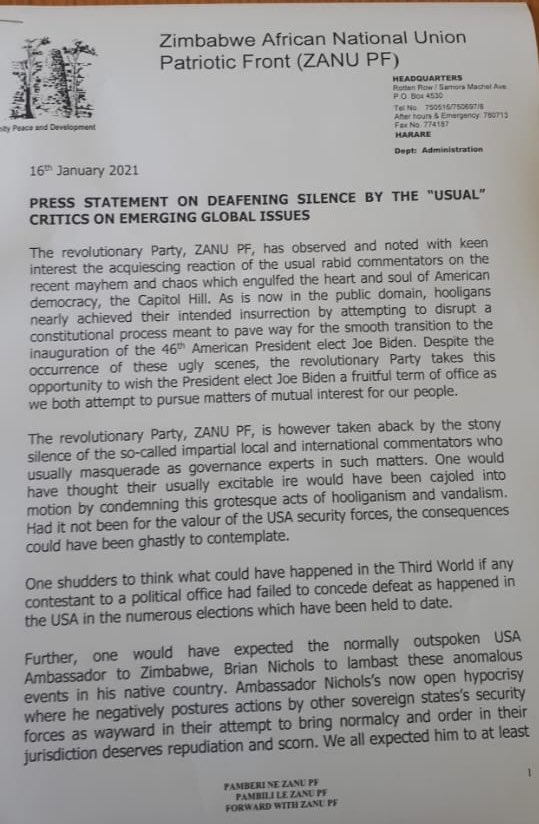 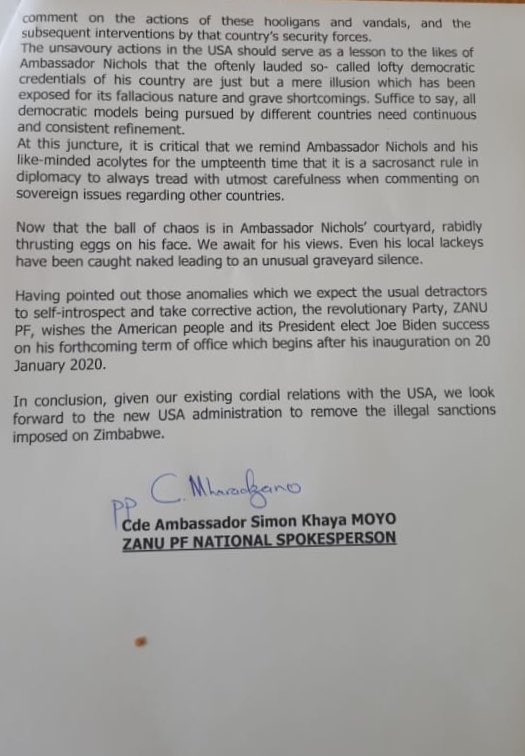