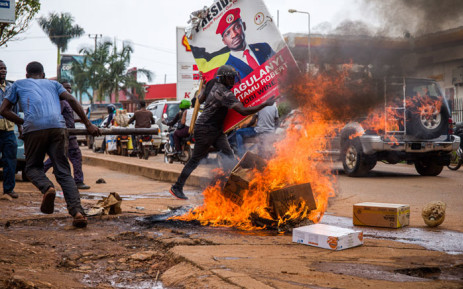 A supporter of Ugandan musician turned politician Robert Kyagulanyi, also known as Bobi Wine, carries his poster as they protest on a street against the arrest of Kyagulanyi during his presidential rally in Kampala, Uganda, on 18 November 2020. Picture: AFP

African dictators are radicalising young people in their countries through the wanton subversion of democratic processes, a commentator has said.

Self-exiled former Higher Education, Science and Technology Development Deputy Minister Godfrey Gandawa opined that it is only a matter of time before young people in Africa tell the liberators-turned-oppressors that enough is enough.

Gandawa was commenting on political developments in Uganda where the country’s president, Yoweri Museveni, unleashed violence against opposition politicians ahead of general elections being conducted today in the East African country.

Scores of opposition protesters were shot dead by security forces and Museveni’s main rival, Bobi Wine (38) has been arrested numerous times and shot at by police and security guards from a private security company ordered off his residence. In a Twitter thread, Gandawa wrote:

This shocking treatment of opposition presidential candidate Bobi Wine’s wife by Uganda’s security apparatus reflects the general lack of respect that African dictators, including Mnangagwa, have for their populations. Violence is the trump card, not ideas.

Museveni will soon claim victory in an election which was anything but free and fair. It does not matter that the evidence of this unfairness is there for all to see, his trump card is violence. Without electoral reforms, Zimbabwe is heading in the same direction in 2023.

At the heart of this problem is the capture of state security organs and the perversion of these national institutions into effective political militias. In Zimbabwe, the harassment of the opposition by the security services is routine, aided by the equally captured judiciary.

However, this is not a long-term winning formula. By subverting the democratic process in this way, Museveni and other African dictators actually serve to radicalize young people who will sooner or later realise the futility of participating in electoral charades.

It is only a matter of time; freedom always prevails over tyranny. Young people in Africa will eventually tell the liberators-turned-oppressors that enough is enough. On that day, not even a dozen armies will be able to save these dictators from the wrath of the people.