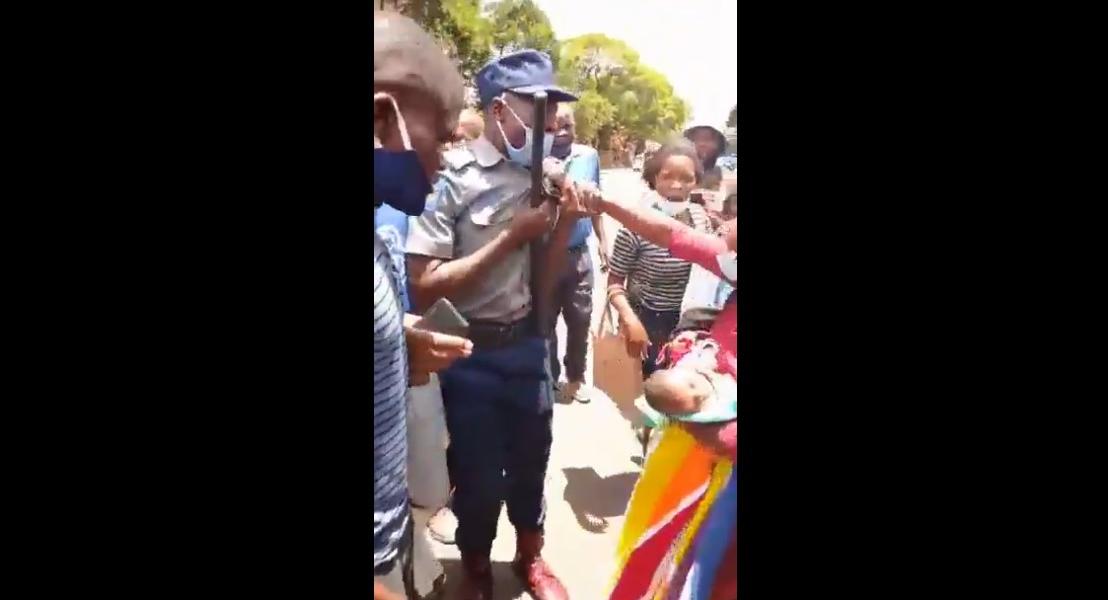 A woman whose baby was reportedly struck dead by a baton-wielding police officer in Harare early this month has finally broken her silence about the incident.

In a Zimbabwe Broadcasting Corporation Television (ZBCtv) broadcast aired on Tuesday night, the woman was identified as Rebecca Musariri.

In a video clip extracted from the ZBCtv broadcast, the woman says she is fine and the baby is fine too. Musariri added that the baby was not hit with a baton by a police officer but some glass fragments from a vehicle fell onto the child.

The video that went viral early this year shows a woman tightly grabbing the neck of a uniformed police officer with one hand while the other holds onto a seemingly motionless baby, yelling at the officer that he had killed the child.

The video has since been used by authorities to clamp down on the opposition MDC Alliance, with the party’s spokesperson Fadzayi Mahere and vice-chairperson Job Sikhala, as well as freelance journalist Hopewell Chin’ono arrested and detained for allegedly sharing the video which was posted on social media by thousands of people.

Below is the video clip from the ZBCtv broadcast:

Some commentators have, however, cast doubt on the identity of the woman, with some arguing that the person interviewed by ZBCtv is not the woman who alleged that a police officer had killed her baby in the video that went viral. Renowned journalist Zenzele Ndebele tweeted:

Video was edited on 0.49 sec. Something is missing where she is narrating about nyaya yakaitika then it’s joined 0:51 when she says…irikufamba pasocial media.

2 comments on “Watch: Woman Whose Baby Was ‘Fatally Struck’ By Police Baton Speaks”