The Reserve Bank of Zimbabwe (RBZ) has dismissed reports which suggest the central bank was planning on introducing $100 and $200 banknotes.

RBZ issued a statement saying “for the time being, ” the bank had no plans to introduce the said notes.

Messages circulating on social media had suggested that the bank was working on introducing the notes in sync with the inflation in the country.

The Reserve Bank of Zimbabwe (RBZ) is working on the introduction of a Z$50 banknote into the market for the convinience of the public.

For the time being, the Bank has no plans of introducing Z$100 and Z$200 banknotes as suggested in some sections of the media. 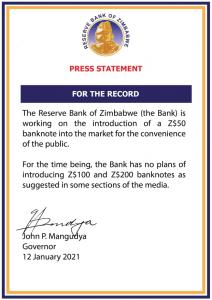