When we began this journey 22 years ago, I was a young college student alongside my contemporaries. I was part of a generation of college students that joined veteran trade unionists, powerful women in the women’s movement, war veterans, civic and church leaders, among others, who believed that the way Zimbabwe was being governed needed serious transformation.
We believed that the system over which Zanu-PF presided was only serving a minority of elites who occupied vantage positions within and around the State, while most Zimbabweans were condemned to suffering. It was plain that the future was bleak unless progressive Zimbabweans intervened to change the course. That is why we championed the message of change.

Looking back those days seem like a long time ago. A new generation has emerged since that time. Babies born in 1999 are now adults. They have lived their formative years in very difficult circumstances. Times were different back in 1999, but I remember the energy and passion of every cadre as if it were yesterday. The idea that was sown in our hearts and minds has no expiry date.

To be sure, the journey has been gruelling. But I was never under any illusion that it would be easy. We have lost thousands of cadres along the way, including our founding father, Morgan Tsvangirai, who departed in February 2018. I was privileged to have a special relationship with him and from him, I learned a lot under his leadership and guidance.

The most painful losses have been those suffered at the hands of the State, through violence. We cannot betray the memory of these dearly departed cadres. We must honour their dreams and aspirations for a better Zimbabwe, otherwise, they would have died in vain. This is why I have never veered from the course that was set in 1999.

I look back and realise that I have spent more than half of my life chasing the vision that was designed and shaped by those courageous men and women who gathered in 1999 to form the Movement for Democratic Change. The greatness of the idea has not diminished with time, no. It has been strengthened.

Those men and women understood that the fundamental weaknesses at the heart of government needed not only new leaders but also a fresh set of ideas and ways of doing things. We remain committed to that vision.

One of the things that please me a lot is seeing a younger generation coming up and carrying the torch in politics. This is how strong institutions grow and I want to pay special tribute to the young people of Zimbabwe whose political consciousness is growing.

The journey has had seminal moments, some positive, and others negative. Both types have been important learning experiences. Some of these challenges have been read as representing existential threats to the organisation, but we overcame them. We survived the loss of our founding father by going on to amass the largest electoral votes in the history of the opposition and had we not been cheated; we would have prevailed.

It is a testament to the strength of the idea, the abiding loyalty of the people to the cause, and the abundance of their political wisdom that the party has withstood severe tests. Even when we have been written off by our doubters, we have shown our mettle and surprised them, disappointing rivals along the way.

Many of you have seen what has happened in the past year. Our rivals have used multiple tricks in the dictators’ handbook, in a calculated and relentless effort to undermine our party.

Using State apparatus, and under the cover of what has been described as lawfare, they have robbed us of our legislators, councillors, and funds that were due to us under the law.

In a direct subversion of democracy, they have even catapulted into Parliament undeserving individuals whom you as voters rejected in the last election. The assault upon democracy has been vicious, but we are undaunted.

As a party, we know that the purpose of these strategies is not just to undermine us, but it is also intended to obliterate us from the political landscape.

Zanu-PF has never been comfortable with strong opposition. They aim to build an opposition that they control. This is the sole purpose of the project that they have moulded with our erstwhile colleagues.

These were deliberate acts of provocation, designed to lure us into conduct that would justify violent repression during the pandemic. We have remained calm and resolute, not because we are unable to respond, but because we know the game they are playing. We also remain true to our founding principle: we are committed to achieving change through peaceful and non-violent means.

We have remained composed because we are confident that progressive fellow Zimbabweans are solidly behind us. We know this because of all the love, support, and encouragement that they have shown us during these testing times. We trust the gift of discernment that is given to Zimbabweans, which enables them to distinguish between right and wrong.

They can tell when a bully is abusing power and they know how to punish this abusive behaviour, which punishment will be exacted through the ballot box.
Significantly, Zimbabweans can tell the difference between genuine opposition that is challenging repression and enablers who are aiding and abetting repression. This is not the first time that the people of Zimbabwe have encountered this situation.

During the last days of colonialism, the Ian Smith regime tried to hoodwink people by promoting people like Bishop Abel Muzorewa, ahead of the true nationalists who were fighting repression. Smith preferred the likes of Muzorewa because they were lackeys who would do his bidding while Muzorewa and others were eager to join the gravy train to serve their interests. However, the people of Zimbabwe saw through this elaborate ruse and rejected it.

This may have happened over 40 years ago, but history has an uncanny habit of repeating itself. Zimbabweans can tell who is genuine and who is not, by the way the Zanu-PF regime treats them. They can distinguish between the true and fake opposition by the way the repressive regime deals with them.

Zanu-PF’s preference for its surrogate at the expense of the MDC Alliance is an obvious giveaway. They will gang up against us, throwing brickbats at us from their unholy alliance. We are not moved, and we remain resolute and focused. We are even more emboldened. We are stronger and more resilient.

I shall be communicating with Zimbabweans more regularly this year, sharing our agenda and programmes. There is so much to do and a lot of energy and commitment to do it. Unfortunately, we are in the middle of a deadly second wave of the COVID-19 pandemic. Common sense behoves us to treat the pandemic with an extraordinary sense of vigilance and in this regard, to do everything necessary to keep it at bay. This means we have had to suspend most of our programmes.

It can’t be business as usual. The lives of all Zimbabweans matter.

Let us continue to pray that things get better for us and the rest of the world. We want to work with everyone to ensure that we get the vaccines and other support that we need to safeguard our communities. I know that the lockdown is extremely hard for many people.

Ours is now largely an informal economy and when people are stopped from working, they have no means of earning income. If it were up to us, we would have offered more creative ways to support people during this difficult time. We would also have done more to support our frontline workers in the healthcare sector who are in harm’s way as they carry out an important national duty.

The billions of dollars that are lost through corruption and patronage can go a long way to support our healthcare sector which was already in bad shape long before the pandemic. Our people are paying the price of high level incompetence over the years.

I wish to conclude by reassuring you that your party, the MDC Alliance, remains solid, undaunted, and emboldened. I would like to thank you for your continued support and encouragement even as we have been attacked from all directions by the regime and its enablers. These enablers will present themselves as the opposition’s opposition. You know that they are not genuinely the alternative.

You know that they have relied on the abuse of state institutions to steal from us — your MPs, councillors, money, and party property — and in doing so, they have undermined trust in politics. But you also know that there are some things that the repressive State and its surrogates can neither command nor steal: your loyalty and support. They cannot force you to support what you disagree with.

They cannot command you to divert your loyalties. I am personally humbled by the knowledge that you have trusted us with these precious gifts, and I re-emphasize my commitment to honour and respect them. Do not be perturbed by the fog they have created because it will soon clear. 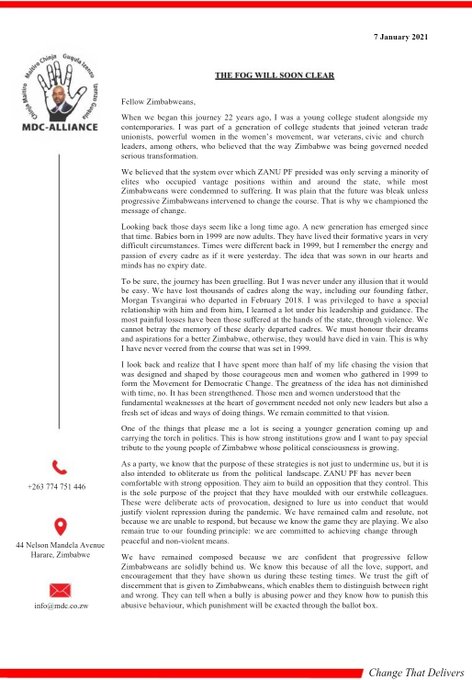 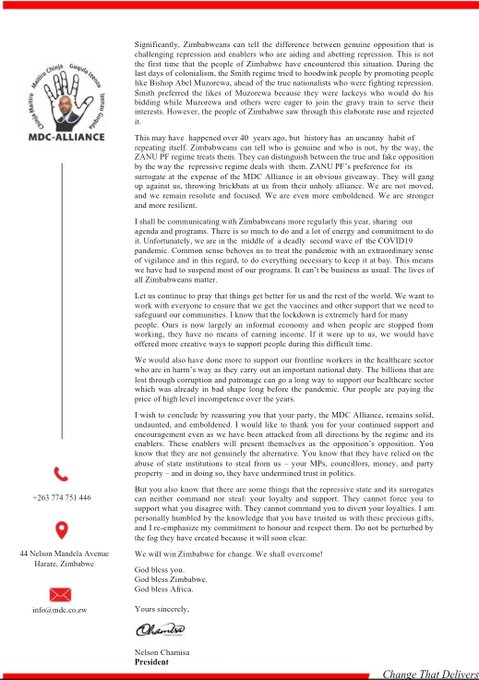 2 comments on “The Fog Clearing Soon: Chamisa Writes To Zimbabweans”