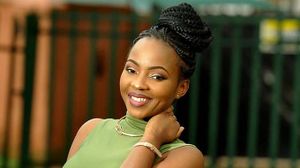 Mukambi who models for UAE brand Bhype DxB Luxury fashions and Turkishbrand Les Benjamin’s Supreme and many others said the social media recognition by one of the country’s biggest social media pages was an achievement.

Mukambi will next month be on a billboard as a cover-girl in UAE further recognizing the model’s work in a foreign country.

Speaking about the recognition, and her work in general, Mukambi said:

Modelling is a career that needs to be taken seriously as it sustains livelihood.

2020 has been a difficult year but I can say that I have managed to survive and started on a good note.

Early in January I got a deal with brands like, “Iceberg”, “BlackPyramid”, “Pardon my French”, “Supreme”, “ElleEse” and “Rugrats”.

In December I got what they wanted to have my face on a billboard for the 2021 summer season.

I was then surprised they used my images on DubaiMall Instagram pages which is actually a big thing here in Dubai and the social media post had gone viral.

Speaking about the future, Mukambi said:

I will remain a commercial model but I also want to venture on image consultancy as a profession because of how she is being pestered and nagged in her direct inbox with different people including celebrities.

Some even visit my work place and ask how I do my makeup, matching it with my outfits and sometimes some of the local models and celebrities I give them tips.

I am not going to open an agency but I will just do it on a contract basis hence will not be clinched to anyone.

My love is on commercial modelling.

I have also worked with designer brands like “Uche” from Nigeria, “Black Pyramid” by Chris Brown,DJ Snake’s popular, “Pardon my French,” “Moho” and “Vintage Frames” among others.

Mukambi left her job to pursue commercial modeling back in 2016.