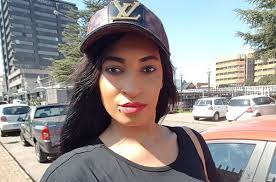 Beverly ‘Bev’ Sibanda is reportedly featuring in Andy Muridzo’s song to be released before the year ends, the Daily News reports.

The development was confirmed by Bev herself who told the publication that:

We are done with the audio and we are now focusing on the video. Our plan is to launch the video on December 31.

Bev said her husband doesn’t mind her being in a video with Muridzo despite the 2 having a controversial past:

When we got married, he was fully aware that I am into showbiz and it cannot surprise him now. Above all, he knows that every person has his or her past.

Bev who hogged the limelight through raunchy dancing said she is trying to revive her music hence her decision to collaborate with Andy Muridzo.