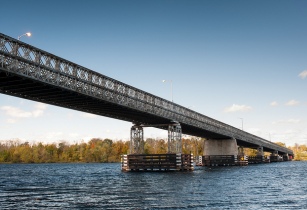 Locals and travelers in Beitbridge yesterday witnessed a breath-stopping sight when a woman believed to be a border jumper fell into the Limpopo infested River from the Alfred Beit Bridge, The Chronicle reports.

The woman who could not be identified is believed to be one of many border jumpers who were on their way to South Africa when the incident occurred and she managed to swim to the South African side of the river safely despite dicing with death in the river which clearly had crocodiles as seen in the following video.

A witness that spoke to the publication called the identified lady lucky because the river is known to have crocodiles and sometimes hippos:

It was just her lucky day, that place is infested with crocodiles and sometimes hippopotamus