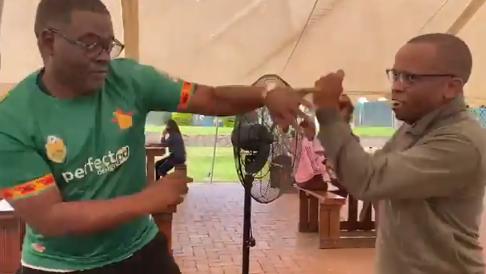 Popular cleric, Shingi Munyeza, and the former Energy Minister, Fortune Chasi, have embarked on a campaign to raise funds to donate to victims of Budiriro house demolitions.

The matter came to light on Twitter where the 2 men made public their initiative through tweets that read:

Many of you might seem the challenge by @ShingiMunyeza. Initially we were fundraising 4 causes excluding the victims of DEMOLITIONS IN BUDIRIRO! I have accepted the challenge subject to two conditions.

My conditions are that him & I visit this place & that we jointly raise funds for clothes & food for them. This is Christmas for heavens sake! Bout with Shingi is on.

If you feel strongly about this do something.!! Don’t just feel. LETS DONATE ANYTHING TO BUDIRIRO. This is so wrong!

If you are a corporate here is a CORPORATE RESPONSIBILITY OPPORTUNITY

Chasi had earlier in the day called the Budiriro house demolitions a crazy idea that can only be carried out by a person using their kidneys to think:

(No one who is rightfully usinging their senses would demolish people’s houses during this season, unless they are using kidneys to think.).

Munyeza accepted the challenge by Chasi and responded in a tweet that reads:

Dear @fortunechasi, the conditions accepted. Let’s visit the sites in Budiriro and assess the needs so they can also have a good Christmas. #Salute

Scores of people, the MDC Alliance, and other CSOs have condemned the demolition of houses in Budiriro which was executed during the rain season. The government a few weeks ago through the Ministry of Information, Publicity and Broadcasting Services secretary, Nick Mangwana, said houses built on illegal land will be demolished.