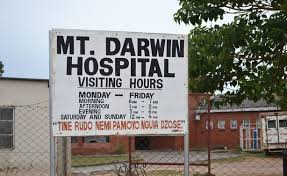 The relatives of a patient who disappeared from Mount Darwin hospital, in Mashonaland Central have accused hospital authorities of negligence.

25-year-old Wendy Chinomungu later passed on at Parirenyatwa Hospital with post-mortem results showing that she had been sexually assaulted.

Chinomungu was found between Concession and Glendale – about 100km away from Mt Darwin hospital – on the roadside and unconscious. The deceased’s twin brother, Webster Chinomungu, said:

My sister wasn’t feeling well for a while and she had been staying with our uncle in Mount Darwin. On the 30th of September, we took her to Mount Darwin hospital where we were received by a hospital staff who identified himself as Doctor Makamba.

The ‘doctor’ insisted that we should leave our patient at the hospital because it had enough capacity to take care of all patients since they had a social welfare department and specially trained personnel to attend to patients.

On the 15th of October, my uncle insisted they wanted to visit their relative to which the alleged doctor agreed, but they could not go on the same day due to financial challenges, so they later travelled on the 22nd of October.

On the 22nd of October, Wendy Chinomungu (25) of Mudimu village under Chief Dotito in Mount Darwin sneaked out of the hospital where she was admitted.

Facts on the ground suggest that the same person was found between Concession and Glendale on the roadside while unconscious.

Police in Concession took her to a nearby hospital, but she was referred to Parirenyatwa hospital where she later died and a post-mortem report pointed to suspected sexual abuse.

He admitted that there was poor communication between the hospital and the patient’s relatives.

Makamba also confirmed that the hospital did not file a missing person’s report on time.

He added that the hospital does not have proper security apart from security guards at the gate and the deceased could have sneaked out.

One Comment on “Patient Disappears From Hospital, Found 100km Away Raped & Dumped”