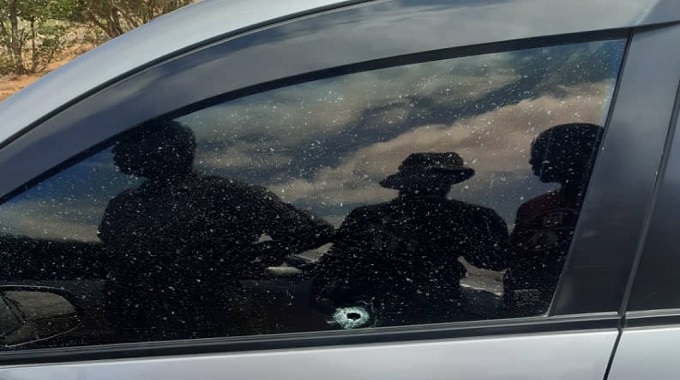 A bullet hole on the passenger side of the vehicle, where Oscar Chiromo was seated

Oscar Chiromo, the director of Beitbridge Transit Shed (for imported vehicles), Chiromo Business Enterprises which owns a chain of bottle stores, butcheries and an abattoir survived an assassination attempt on Wednesday after two gunmen opened fire at him and a bullet grazed his arm.

Chiromo said he was travelling from Lutumba Growth point to Beitbridge town in a Honda Fit with a colleague around 9 am when a grey Nissan Xtrail in front of them slowed down and its occupants opened fire in his direction. He said:

We had initially spotted the car near the abattoir but suspected nothing. I was seated on the passenger’s seat of the Honda Fit.

As we were completing the overtaking process one the two men in the Nissan Xtrail shot at me twice, but fortunately, one bullet missed, and the other grazed on my arm.

The businessman added that after shooting at him, the two assailants slowed down and made a U-turn, and sped off along the Beitbridge-Masvingo road.

Chiromo said his colleague stopped the vehicle before they called the police who rushed to the scene.