The MDC Alliance has released a statement distancing itself from claims made by its former woman affairs leader for Bulawayo Tendai Masotsha that Tawanda Muchehiwa wanted to bomb government buildings in Bulawayo. This was contained in a statement that also condemned the arrest of Mayor Jacob Mafume who is being charged with criminal abuse of office.

Part of the statement that dismisses reports in the state media claiming the plot by the MDC Alliance to commit terrorist activities have been exposed reads:

1. The perpetrators of thc abduction of Tawanda Muchehiwa. namely state agents and ferret forces sent by Mr Mnangagwa’s regime, a. all those cotnplieit in the said abduction – including Impala Car Rental Company must be expeditiously brought to book for the torture and atrocities .mmined against Tawanda Muchehiwa.

2. The M DC Alliance unequivocally dissociates itself with the utterances expressed by Tendai Masotsha in an audio recording which was circulated publicly on or about thc 24 of November 2020, post our internal inquiry. The said utterances run contrary to the values. beliefs. principles and disposition of the party. As a matter of record. the alleged conversation with Hon Jameson Timba never t.k place.

3. As a pany of rules, the National Standing Committee resolves and recommends to the National Council that Tendai Masotsha be expelled from the MDC: Alliance in accordance with thc provisions of the party Constitution on the grounds that her conduct violates thc values that govern the party and her continued membership would be detrimental to the MDC Alliance.

2. The party will launch its commemoration of this important campaign in Matabeleland South Province on the 27. of November 2020. 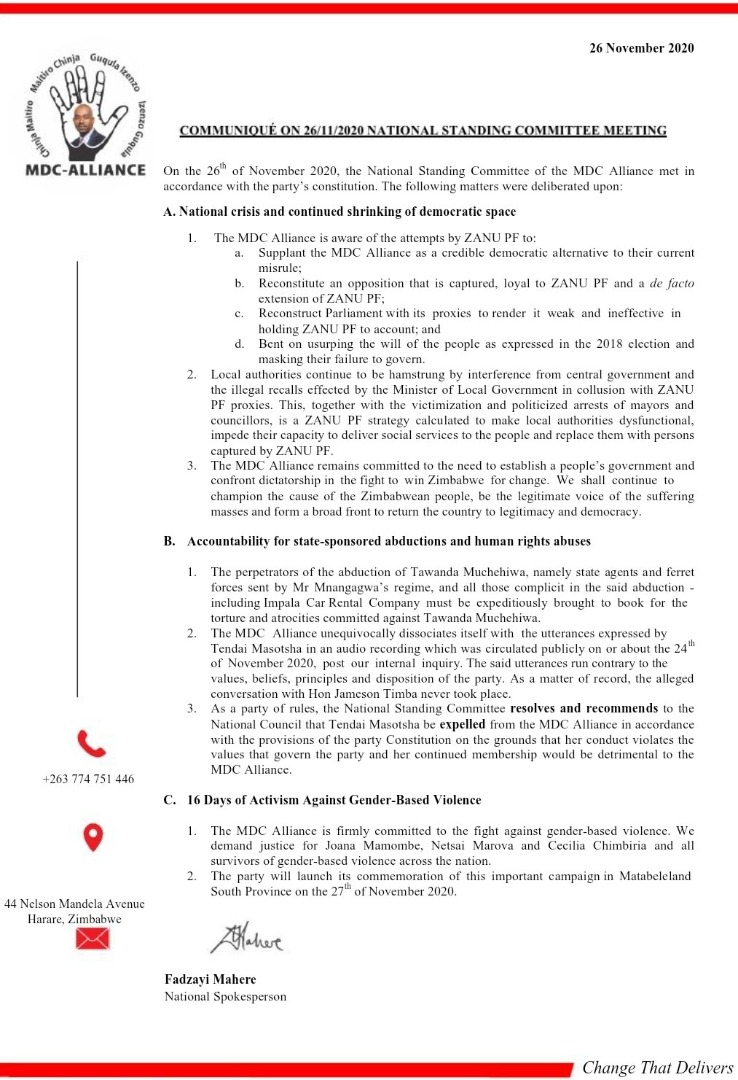