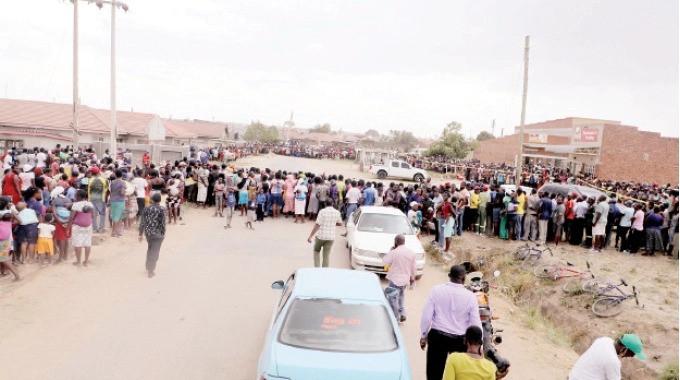 Tapiwa Makore’s uncle Thanks Makore was reportedly supposed to pay 7-year-old Tapiwa ‘s killers $1500 to kill the boy for suspected ritual purposes, Bustop TV reports. The matter came to light when Thanks was seeking bail at the High court after he was arrested for allegedly being the mastermind behind the gruesome murder.

During the bail hearing the Investigating Officer in the case told the court that Thanks hired the services of his brother Tapiwa and the local herdsmen Tafadzwa Shamba and promised to pay them $1500 for the heinous crime:

Thanks Makore commissioned his twin brother Tapiwa Makore Snr and Tafadzwa Shamba to commit the heinous crime.The accused is the one who employed or gave the contract to these two accused or his accomplices. He promised to pay them US$1 500 to his accomplices who killed Tapiwa Makore.

After the commission of the offence, the accused is said to have received the head and the arms of the deceased.

The state in opposing bail said if Thanks is released on bail he will abscond trial because his charges are serious and if convicted they carry a capital punishment:

The applicant is likely to interfere with witnesses if granted bail. So far, we are done at Damofalls where his first wife resides. We are left with Warren Park where his second wife resides.

We are still doing investigations and we are yet to finish searching. One of the main witnesses is related to the applicant. In fact, he is the son of the applicant’s young brother so the accused might interfere with the witness. American Embassy employs the applicant, so if granted bail he might seek transfer and relocate from Zimbabwe and abscond.

Considering the nature of the offence Thanks Makore is facing that carries a capital sentence upon conviction, he would abscond if granted bail. Another issue the IO raised was that Thanks Makore had a target on his back and if released his safety would be compromised.

Another issue is when we were carrying out searches at his Damofalls residence, there was a mob who were looking for the applicant. In fact, they were throwing stones at his house so if granted bail he might be attacked by the mob.