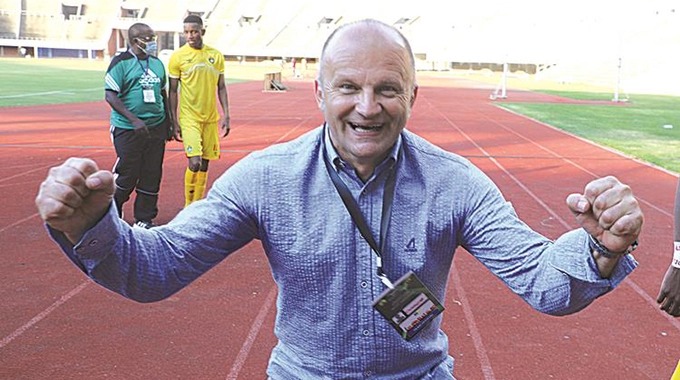 Warriors coach, Zdravko Logarusic, shows his boundless joy at the National Sports Stadium (16/11/20) after his team produced a comeback for the ages to force a 2-2 draw against African champions, Algeria, in an AFCON qualifier. – Picture: Kudakwashe Hunda

Warriors head coach Zdravko Logarusic has expressed satisfaction with the 2-2 draw against Algeria in an Africa Cup of Nations (AFCON) qualifier played at the National Sports Stadium in Harare on Monday.

The Croatian believes the point taken from their more fancied opponents firmly places the Warriors’ AFCON destiny firmly in their own hands. He said:

It’s not easy to come up against Algeria. We had expected to win (at home) but then we conceded two naive goals from individual mistakes.

We saw our weaknesses and we had to organise our individual tactical moves as a group.

We had to cover one another and not to create a lot of space.

Anyway, against the champions of Africa, we were 0-2 down and we came up and I am satisfied.

Goals from Andy Delort and Riyad Mahrez had put the Desert Foxes 2-0 up by the 38th minute but Warriors captain Knowledge Musona halved the deficit from a sumptuous freekick just before half time before Prince Dube scored the equaliser with his first touch in the 81st minute.

For the Warriors’equaliser, Divine Lunga, who had replaced Bolton Wanderers fullback Adam Chicksen, forced a corner. Musona arched the delivery inside the six-yard box which was flicked on to Dube, who forced a snapshot past Algerian goalkeeper Raïs M’Bolhi’s grasp.