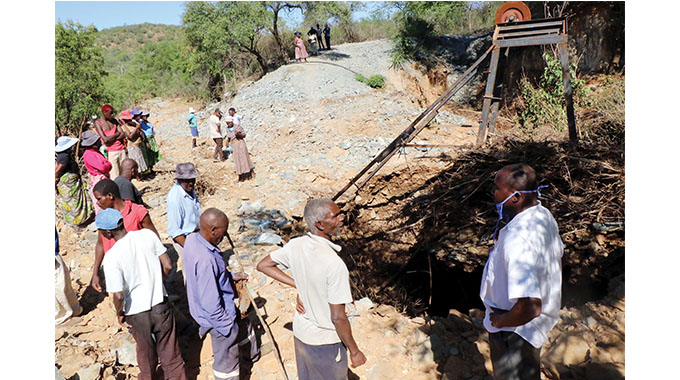 Distraught Esikhoveni villagers at the mine shaft that collapsed trapping six miners. (Picture by Nkosizile Ndlovu)

Six miners, four of them from one family, are feared dead after the mine they were working in collapsed after heavy rains last Tuesday.

The mine is located on the banks of Thekwane River in Matshetshe, Esigodini in Matabeleland South.

The trapped miners have been identified as Nkosilathi Ndlovu (29), Christopher Dube (23), Ndumiso Dube (19) and Blessed Ncube (24), all members of one family, Nduduzo Ntini (28) and another miner only identified as Mlilo.

As of Saturday (yesterday), the miners had not been rescued or their bodies recovered after rescue efforts were stalled as the area was deemed too dangerous to carry out rescue operations by experts from How Mine, which offered help in the rescue effort.

A villager who spoke to the only miner who escaped from the disaster said the miners had been trapped after ignoring advice to leave the claim at the onset of the rains. The villager said:

The problem, the guy who escaped told us, was that the other six guys did not think the rain was heavy enough to threaten them.

The area that they were mining at only had a slight drizzle so they thought it was fine but the water was rushing down from the other side of the river.

The mine had three tiers. He was on the third level and his job was to warn those below him when there was an instruction from above.

He told them that it was time to leave but because there are always joking as guys, they did not take him seriously.

Even though he was on the third level when he got out of the mine the water was already at knee length.

Villagers accused the miner owner, Sakhile Ndlovu of denying that she is the proprietor of the claim, saying this delayed rescue efforts.