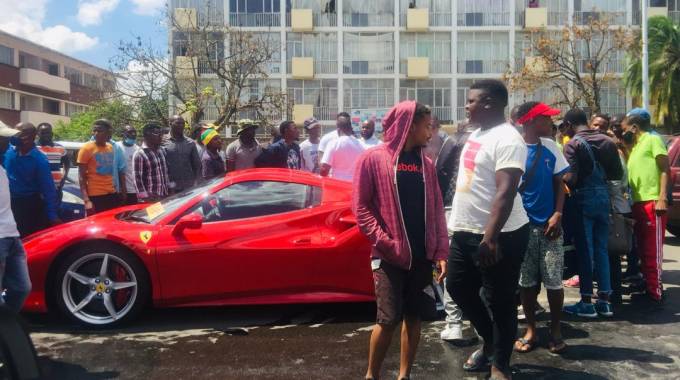 A red Ferrari belonging to Genius “Ginimbi” Kadungure was abandoned by its driver on Friday afternoon after it overheated.

The luxurious vehicle which was one of the late Ginimbi’s personal favourites from his fleet was abandoned around midday along Herbert Chitepo Street and Second Street in Harare CBD.

Apparently, the vehicle was being driven by his best friend, DJ Rimo who was en-route to Doves Funeral Services Parlour where Ginimbi’s memorial service was taking place.

Onlookers who were gathered where the car gave in said Rimo was reportedly doing high raves before the engine overheated.

Zimbabwe Republic Police (ZRP) had to control a huge crowd of people who had gathered at Doves to pay their last respects to the late flamboyant businessman.

One Comment on “Ginimbi Ferrari ‘Smokes’, Abandoned In Central Harare”