The Desert Foxes dominated the entire match save for a few early spells of Warriors’ dominance immediately after Half time.

Algeria got their first goal in the 31st minute from Bounedjah who mopped home a spill from Chipezeze who had warded off Sofiane Feghouli’s low drive.

Immediately before half time, Algeria’s Bounedjah broke away trying to reach a through ball but Zimbabwe’s goalkeeper, Chipezeze reacted quickly and reached for it first but got a nudge on his knee.

Injured Chipezeze was replaced by Shumba in the second half.

Kadewere got Zimbabwe’s ten minutes into the first half when he broke away from the defenders, got 1-v-1 with the keeper but his tip shot was saved.

Manchester City forward and Algeria’s captain, Riyad Mahrez made it three for the Desert Foxes in the 67th minute after beating three markers before lofting the ball over the advancing Shumba.

Eleven minutes later, Lyon striker Tino Kadewere pulled one for Zimbabwe after beating an offside trap to chip the ball over the keeper. 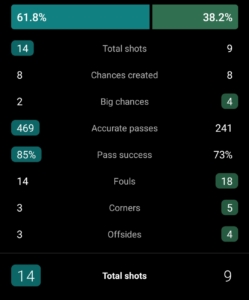 The two sides will clash again on Monday at the National Sports Stadium in a return leg.

Meanwhile, Zambia won 2-1 against Botswana and are now one point behind Zimbabwe who have 4 points after three matches.