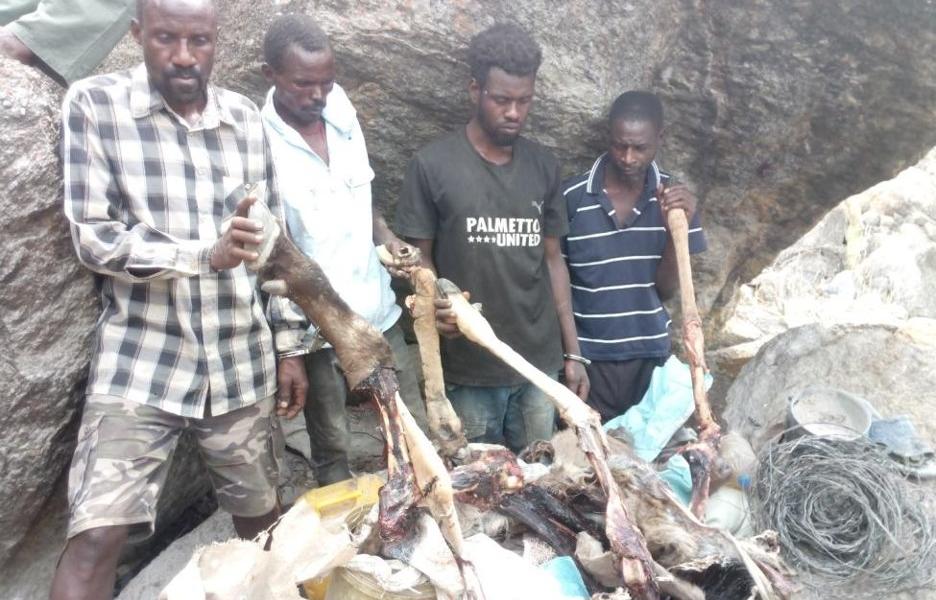 Four poachers who were arrested over the weekend for killing 5 buffalo and 2 kudus were this Monday sentenced in Hwange court to an effective 18 months each, plus restitution to the Zimbabwe Parks and Wildlife Management Authority (ZimParks) of US$48 000 for the buffalo and US$ 4 500 for the kudu.

According to Bhejane Trust, the poachers were arrested after they were tracked by a combined team of Bhejane Trust Rhino Monitors, National Parks and a Painted Dog Conservation Anti-Poaching (PDC) team.

The poachers had hidden their kit and meat at their base camp hidden in the hills in the Deka Tail concession, bordering the Sinamatella area.

However, the poachers had left the camp, so the team continued to track them. For the next 5km, the poachers were anti-tracking, but when they thought they were clear, they headed straight for their home village.

The team followed, and some 28km from the base, they came to the poachers home village – by now it was getting dark.

They waited until everything in the village settled down and went to sleep, and then raided the houses – by now PDC had brought in a tracker dog to help.

They arrested four of the poachers, but another three escaped, but are known and are on the run. They recovered meat and various incriminating items.

The four poachers confessed to the poaching, led the team to their snare lines which were removed, and gave a lot of valuable information on all the poaching syndicates in the area.