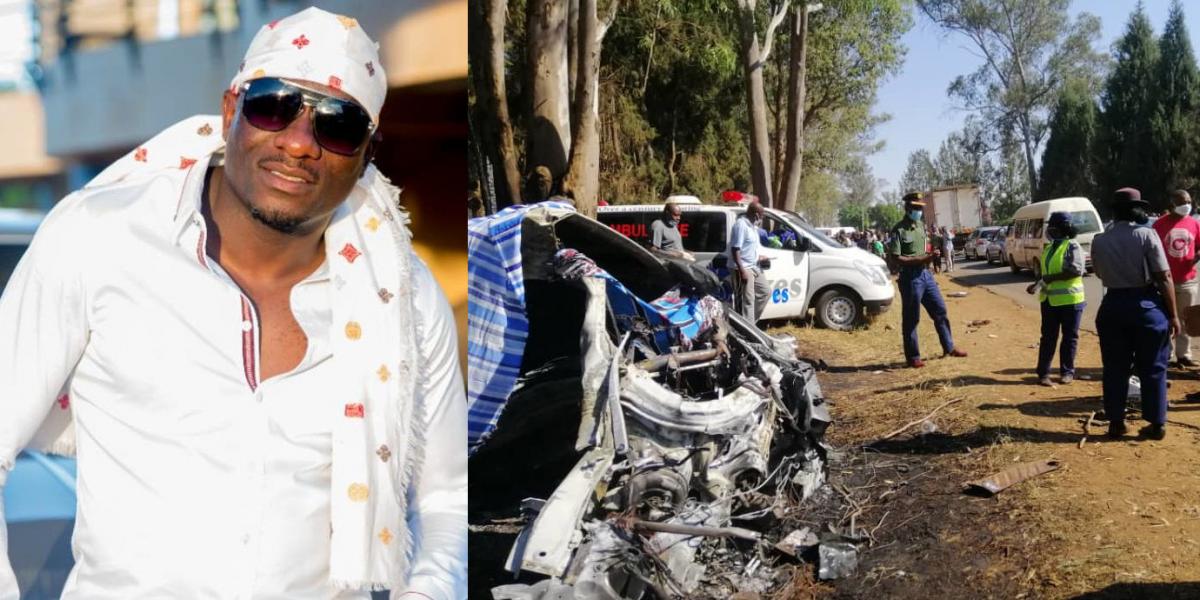 News of Ginimbi’s death has trended on Zimbabwe social media since it broke early morning. The socialite died in a high speed car accident after the Rolls Royce he was traveling in with 3 friends collided with a Honda Fit and then smashed into some trees. Ginimbi was thrown out and reportedly died on the spot. The car burst into flames and the other occupants also lost their lives in the car.

Here are some reactions from Zimbabweans on social media:

Josey Mahachie: Just watched Madam Boss’ live on Facebook and to think that an eye witness says Ginimbi was actually alive, tried to open the Rolls Royce doors to save the girls whilst they knocked burning alive until he ran short of breath is heartbreaking

Happi Zengeni: Ideally Rolls Royce should be sending a team over to investigate how their car can burn like that after colliding with a Honda fit and the impact of hitting a tree. Otherwise it’s quite easy to go with conspiracy theories at this stage.

We were still at school but even Mitsubishi spoke about the Peter Pamire accident back then. Every car maker should ideally do this. This is loss of future business to RR.

Energy Mutodi: Goromonzi West Constituency is engulfed with shock, disbelief & sadness following the untimely death of Genius Kadungure in a car accident in Borrowdale. I’ve visited the scene & its horrible. No doubt his colorful, eventful and adorable life will inspire many youths.

Linda Tsungirirai Masarira: Sad to learn that @GeniusKadungure aka Ginimbi has passed on. Life is vanity. Ginimbis death is a lesson to all of us not to drink and drive. My heartfelt condolences to his family and friends. May his soul rest in eternal peace.

Ranga Mberi:Our emergency response systems are such a disaster. RIP to all involved and condolences to friends and family. So sad.

Tich Ray:Boy lived his life to the fullest albeit to the chagrin of many, myself included coz of Zanu PF links & the shadiness of source of his wealth, and his video clips provided plenty laughs daily.

Genius Kadungure Twitter Account: I feel like hell, I dont even know which words to even use, Genius Kadungure has been called by God, he is no more. He was in a terrible accident around 5am, he died on the spot with 3 of his friends in the car, Karim, Elisha and Moana – Ms Shally

Saviour Kasukuwere: Genius Kadungure~This is unbearable. A youngman who worked hard and enjoyed hard is no more! The flower has wilted! Go well Boss Ginimbi. MHDSRIP

LynneM: Gone too soon,sadly the most goodbyes are the ones that are left unsaid & unexplained & em sure a lot of young people who loved & followed Ginimbi will wake up today to the most shocking & saddest news,they will seek answers they will never find -Sad Pensive face MHSRP

Thandekile Moyo: Crushed to hear about the passing of Ginimbi.Broken heart
I didn’t know the man but it’s so so sad to hear that the young man is no more.
Sincere condolence to his family, friends and fans.
This year has not been kind to anyone has it?
So sad…
#ZanupfMustGo

mmatigari: Sad to hear of the passing on of Ginimbi. Pasi hariguti imiwee. Boyz raizipirwa, so they made the best of the time God provided.

Mduduzi Mathuthu:Could Mnangagwa’s curfew have saved both Cal_Vin and Genius? Yes, if it had been complied with. That’s a conversation to be had, as insensitive as it might come across.

JoyJoy: So unsettling how in Zimbabwe, there is rapid response to throw teargas on civilians, fully kitted security forces to inflict fear and pain, but no fire brigade can respond with the same swiftness. In the city even.

Cde Never Maswerasei: Dear Zimbabwe: This is what I have learnt from Ginimbi’s sudden death:

2. Don’t drive &/or speed especially after a night out.

4. Our system is broken. MHSRIP.

MG Muzenda: No emergency services on sight.
The accident scene wasn’t cordoned off. People were taking photos and videos. No one stopped them. The police had to use a bystander’s tools to open the car.
Zimbabwe will rob you of dignity even in death.