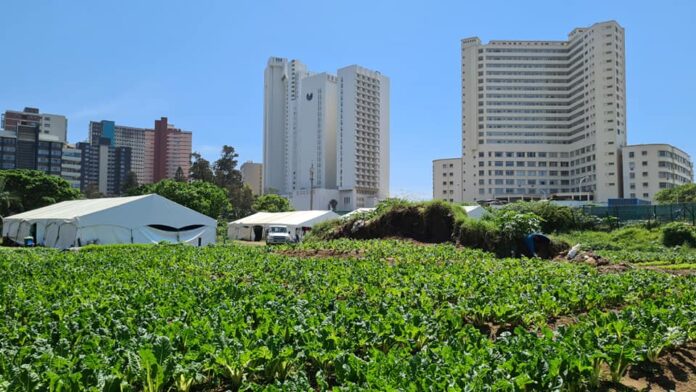 A homeless Zimbabwean man living in Durban, South Africa, has helped over a dozen other homeless men to convert a vacant piece of land into a productive farm.

The 15 homeless men started working on a plot of land behind Durban’s famous beachfront Elangeni Hotel at the start of the lockdown in March.

Talborne Organics, a fertiliser supplier, said one of them is Zimbabwean and he has the farming experience and June, he used his skills to teach the other homeless men to farm.

The local municipality supported their project and it’s now flourished into an incredible organic farm, named the Elangeni Green Zone.

Elangeni Green Zone produces cabbages, lettuce, spinach, carrots among other vegetables without spraying them with chemicals.

Durban author and journalist Sue Derwent visited the farm on Tuesday and she later posted:

Now THIS, people, is buying fresh, straight out the ground, and local. And seasonal.

And it’s not run by some cute, trendy NGO doing an ‘urban farming project to help the homeless’.

This is the homeless helping themselves.

Honestly, you can’t believe what these guys have achieved. Without any chemical sprays or any such things.

Just with a vacant lot, they were housed in during hard lockdown, their bare hands, a couple of spades, and the assistance of the most delightfully unassuming homeless guy who just happens to have an agricultural diploma, and who was bored during the lockdown.

He has also been training anyone there who wanted to participate.

… here are huge beautiful beef tomatoes that will apparently be ready in 10 days to 2 weeks I am told.

And I see things like onions, chillies and peppers they are experimenting with.

Apparently, the heat is a bit of a challenge.