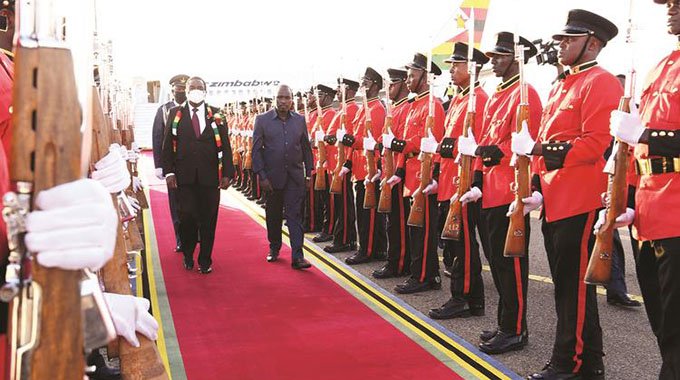 President Mnangagwa inspects a guard of honour in the company of Tanzanian Minister of Mines Mr Doto Biteko on arrival at Julius Nyerere International Airport in Dar es Salaam on 04/11/2020.

The swearing-in ceremony will be held at Jamhuri Stadium in Tanzania’s administrative capital, Dodoma.

He arrived at Julius Nyerere International Airport in Dar es Salaam where he was met by Zimbabwe’s Ambassador to Tanzania, Lieutenant-General (Retired) Anselem Sanyatwe.

President Magufuli of the Chama Cha Mapinduzi (CCM) party won 84 per cent of the vote while his main challenger, Tundu Lissu of Chadema party, garnered only 13 per cent.

CCM has been in power since Tanzania attained independence from Britain in 1961.

Observer missions from the Southern African Development Community (SADC) and the East African Community (EAC) commended Tanzanians for voting in a peaceful manner.

However, the poll was reportedly marred by violence against opposition candidates and widespread stuffing of ballot boxes.