The Ministry of Information, Publicity and Broadcasting Services has issued a statement following claims by Gift Karanda, an accomplice in the plot by Henrietta Rushwaya to smuggle six kgs of gold that the gold belonged to the first family. The first family has since distanced itself from the smuggling saga. Below is the ministry’s statement in full.

01 November 2020
Reference is made to the recent arrests of several suspects in an alleged case of attempted gold smuggling, at the Robert Mugabe International Airport on 26 October 2020 Following the arrests. Government has been made aware that there are some individuals and groups, including one of the suspects in the case. who are abusing the First Family’s name in their illegal activities Police investigations have since established that recent claims by one suspect Gift Karanda. that members of the First Family are involved in gold smuggling are false and were intended to intimidate law enforcement agencies, thereby obstructing the course of justice His Excellency. President Emmerson Mnangagwa has demonstrated his zero-tolerance stance on corruption and organised crime On her part, the First Lady. Amai Auxilia Mnangagwa has distanced herself and family from any of the suspects involved in the gold smuggling case.

All security apparatus have standing orders to enforce the law blinded to who a person is, knows or is related to. The law itself has adequate provisions to deal with those who Interfere with its application or processes Those who also try to defeat the course of justice by invoking names of powerful or influential people will face the full wrath of the law for it. 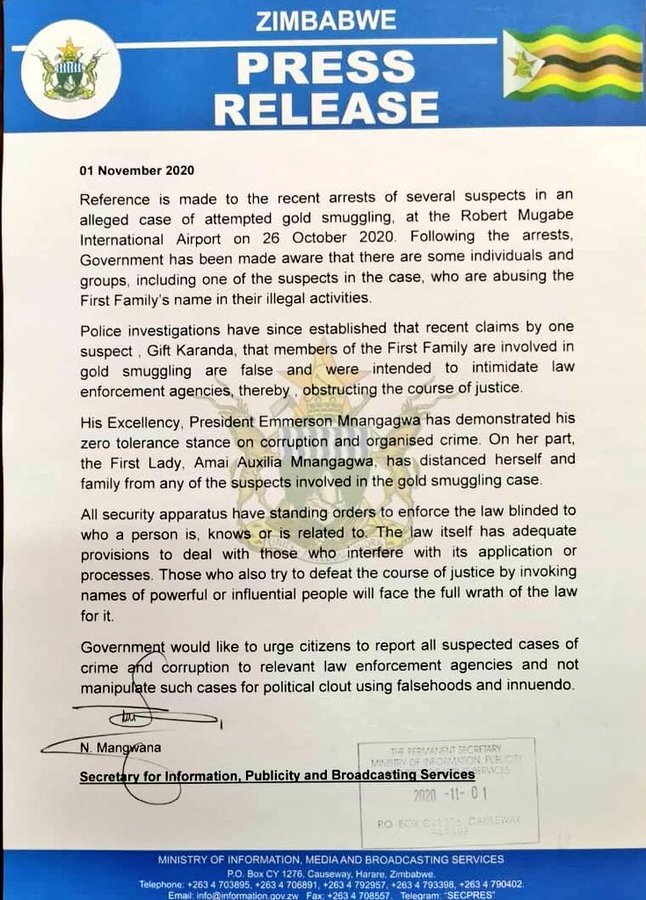