The Zimbabwe Republic Police (ZRP) has dismissed attempts to link the First Lady Auxillia Mnangagwa and her son Collins Mnangagwa to gold smuggling. This comes after Gift Karanda, who was arrested in connection with a plot by Ms Henrietta Rushwaya to smuggle six kgs of gold to Dubai had suggested that the gold belonged to the first lady and her son. We present below the statement issued by police national spokesperson Assistant Commissioner Paul Nyathi which suggests that Karanda lied to authorities.

The Zimbabwe Republic Police confirms that Gift Karanda was arrested and is facing charges of contravening section 184(1)(e) of the Criminal Law Codification and Reform Act [Chapter 9:23] that is Defeating or Obstructing the Course of Justice. He is also facing charges of contravening section 3(1)(a) of the Gold Trade Act [Chapter 21:03] ,dealing in and possession of gold without being a holder of a licence or permit and also contravening section 182(1) of the Customs and Exercise Act [Chapter 23:02], smuggling. This relates to his utterances to law enforcement officers at the Robert Gabriel Mugabe International Airport on 26 October 2020 when he indicated that there was no case as the gold belonged to the First Lady Amai Auxilia MNANGAGWA and her son Collins MNANGAGWA. Comprehensive investigations have proved that the statement by Gift Karanda was false and malicious with intent to defeat or obstruct the course of justice.

As such he was accordingly charged and the case is pending before the courts. 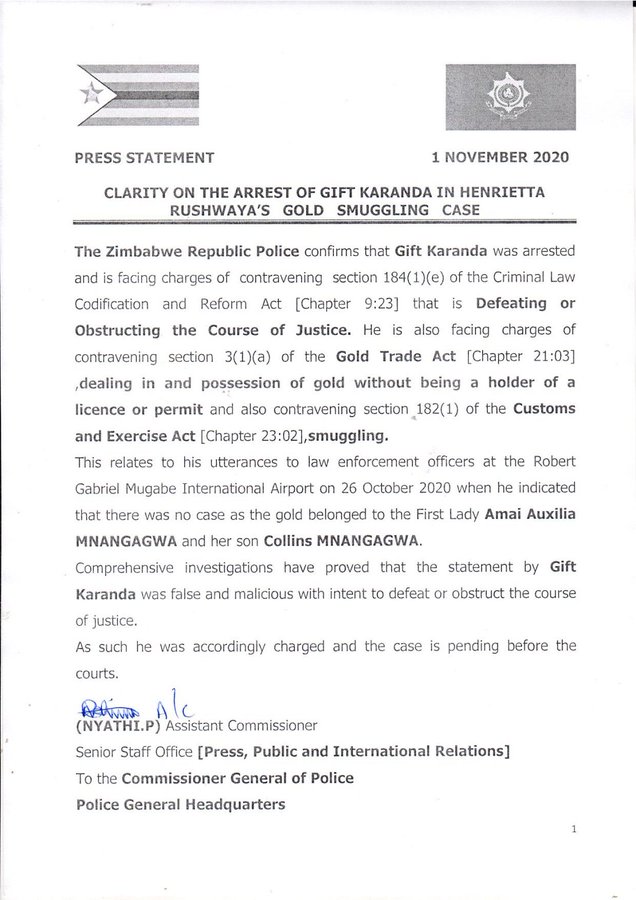