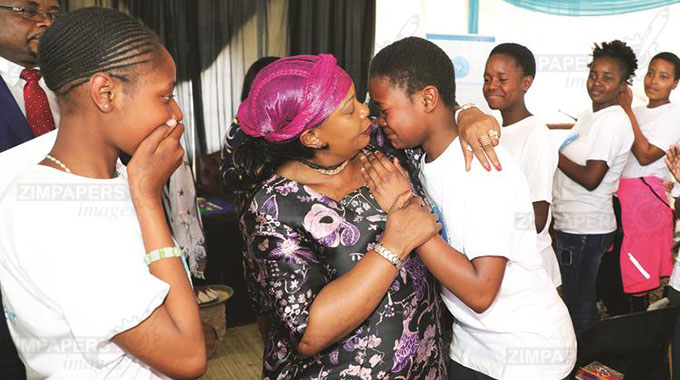 First Lady Auxillia Mnangagwa comforts Nokutenda Mutsutsururu who could not help shed tears after the news that she was among the scholarship beneficiaries in Harare. — (Picture by John Manzongo).

First Lady Auxillia Mnangagwa has refuted reports that have linked her and her son Collins to the gold baroness, Henrietta Rushwaya.

Rushwaya was arrested on Monday last week at the Robert Gabriel Mugabe International Airport while attempting to smuggle 6kgs of gold to Dubai.

During Rushwaya’s arrest, one of the officers reportedly implicated Mnangagwa and her son Collins in the gold-smuggling syndicate.

In a statement, the First Lady said she does not engage in gold smuggling and she also challenged police to issue a statement regarding her alleged links with Rushwaya. The statement read in part:

I have no dealings nor involvement with Miss Henrietta Rushwaya of any illegal kind.

I am a strong advocate for transparency and honesty and any continued silence by the police can be misconstrued as a cover-up.

… It pains me that my son who is hardworking and an obedient son is being attacked for no reason other than being a member of the first family.

He is a hard-working person and strives to improve himself day by day. As a mother, I am proud of his work ethic and encourage him not to be affected by malicious rumours.

One Comment on “Auxillia Mnangagwa Distances Herself, Son Collins From Henrietta Rushwaya”