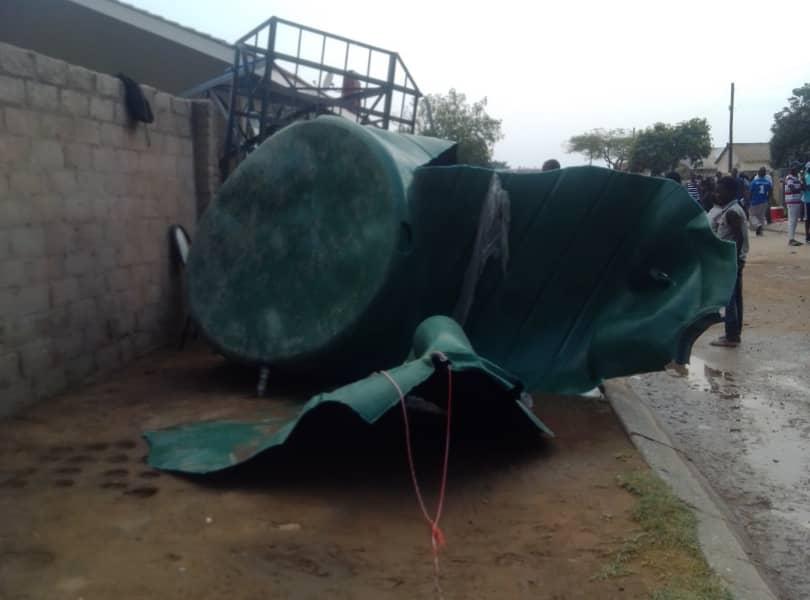 The water tank which fell and killed nine-year-old Trinity Saungweme, together with Colleen Kamonere (18 months) and left the former’s brother Thulani (two years) with a broken leg in Chitungwiza on Wednesday, 21 October 2020.

Two children died and a third was hospitalised after a galvanised steel stand gave in to the weight of a loaded 5 000 litre water tank and collapsed on them at house number 1495 in Unit A, Seke, Chitungwiza on Wednesday at around 4 pm.

The deceased are Trinity Saungweme (9) and Colleen Kamonere aged 18 months. Trinity’s brother Thulani (7) suffered a fractured leg after water from the broken tank threw him a few paces from where he was playing.

Trinity was a Grade Four pupil while his sibling is in Grade Two at Dzidzai Primary School in the sprawling town located about 30km to the south of Harare, the capital.

Thulani was initially hospitalised at Chitungwiza Central Hospital but has since been discharged with a plastered leg and is recuperating at home.

Trinity will be buried on Saturday at Masasi Village in Chief Marange’s realm in Manicaland Province.

Colleen is set for burial at Nyakwangwa Village in Chief Nyamukoho’s area of Mutoko District on Saturday.

Trinity’s father, Challenge Saungweme (31), told The Herald that a bloodied woman from his neighbourhood alerted him about the incident while he was with his friend, Gumisai Kamonere, Colleen’s father. He said:

It was around 4.30 pm or thereabouts when I saw a rather distraught woman running in my direction signalling me to attend to what had happened back home. My hunch told me that something had gone seriously wrong because the woman’s clothes were bloodied.

When I got to our street, which is only about 300 metres from the car park where my friends and I were, my worst fears were confirmed. Hordes of people were milling around in clear sign of things gone wrong, and there was a bloodied pool of water running down the street.

Meanwhile, Taipa Ganda (31), the neighbour whose water tank crushed the three children, provided money for Colleen’s coffin and met other funeral expenses so far incurred by the two families.