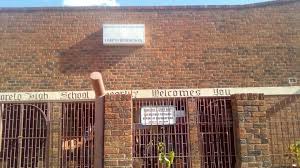 A school in Silobela, Midlands Province Loreto High School has suspended about 20 students for allegedly engaging in se_xual activities during the June examination period, The Chronicle reports.

The incident which has left parents questioning the logic behind suspending students just before exams was confirmed by Midlands Provincial Education Director Mr. Jameson Machimbira who said:

Yes, we received information that some pupils both male and female from Loreto High School had been suspended following reports that they were caught engaging in unconfirmed se_xual activities. I received phone calls from some affected parents who wanted the Ministry (Primary and Secondary Education) to intervene citing the timing of the suspensions. So, we sent a team to investigate the matter on Friday and they are still to give me a report. So, I am waiting for the report

Parents of the suspended students spoke to the publication and said they were disturbed by the development since their children are supposed to sit for exams in less than 6 weeks from now. One of the students who is professing innocence in the matter has reportedly gone on a hunger strike in a bid to seek an audience with the authorities.

When contacted for comment on the Issue at Loreto High School, the Minister Of Education Cain Mathema he was ready to listen to anyone who wants the issue solved:

We will do everything we can to protect the children and I’m ready if any Honourable Member has that evidence let them come to my office and show me and we will do the investigations. We will go out of our way to stop every criminal activity that may be taking place in schools. We are ready to listen to everybody, every parent, every guardian or community member; if you see any indecent activity by any child, please bring that information to my office.

Meanwhile, teachers are still on strike ever since schools reopened on 28 September for the writing classes, ZCTU last week urged the government to close schools till teachers returned to work after a video of a nasty classroom fight circulated on social media.