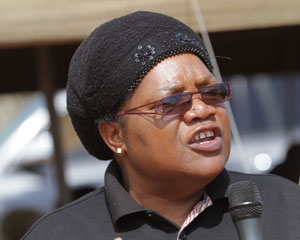 President Emmerson Mnangagwa has reportedly tasked the principal of the Herbert Chitepo School of Ideology, Munyaradzi Machacha, to bring former Zanu PF stalwarts Joice Mujuru and Nicholas Goche back to their party, the Daily News reports.

This was revealed by a party insider who said the president’s bid to have Mujuru and Goche back was because G40 is planning to lure them into their camp in its broader plan to come back to power.

The source that wanted to remain anonymous told the Daily News that:

The G40 cabal wants to take charge of Mashonaland Central Province as part of their broader strategy to creep back into power. They want Mai Mujuru, Goche and some politburo members in the province to be on their side.

Of late Goche has gone very, very quiet and is no longer attending party meetings and functions like he used to do despite having lost his Cabinet post.

This is worrying and the president (Mnangagwa) is concerned. The president has asked Machacha to ensure that Mujuru returns to the party. The president also wants Goche to bounce back into the central committee.

Joice Mujuru was expelled from the party by former president Robert Mugabe in 2014 after the latter accused her of trying to topple him from power.

Goche who also suffered the same fate as Mujuru was last week arrested for allegedly stealing 18 cattle from a local farmer a case his lawyers described as a civil matter, not a criminal matter.