The MDC Alliance released the following statement following the suspension of the by-elections after the Health Ministry using SI 225A of 2020 idenfinetly suspended by-elections.

On the 2nd of October 2020, the Minister of Health published SI 225 of 2020 which indefinitely suspends the holding of by-elections in Zimbabwe ‘So the duration of the period of the declaration of COV1D-19 as a formidable epidemic.

The MDC Alliance is deeply concerned with the unconstitutionality of the decision to suspend by-elections. Section 159 of the Constitution requires vacant elective public offices to be tilled within 90 ninety days. This constitutional imperative cannot be overturned by subsidiary legislation as the Constitution is the supreme law. The effective banning of elections follows the unlawful recalls of elected representatives from Parliament and Local Government. The will of the people continues lobs violated by the illegitimate regime of Mr Mnangagwa.

We are of the firm view that h is grossly tutreasonable to ban by-elections when Covid19 restrictions confinue to be eased throughout the country. Various electoml activities are tatting place such as internal party elections by Zinn] PC and extraorthmuy congresses by other parties. In the circumstances. there is no justification for the ban.

We are funher concerned that the suspension of by-elections infringes upon the independence of the Zimbabwe Electoral Commission (ZEC). ZEC has a constitutional duty to formulate electoral policies without the direction or control of anyone as set out in section 235 of the Constitution. The actions of the Minister of Health only serve to undermine ZEC’s independence and to use the excuse of CovidI9 to take away the right of citizens to vote and be represented by people of their choosing in Parliament.

The MDC Alliance calls for the urgent repeal of SI 225 of 2020 and for comprehensive electoral reforms that pave the way for credible elections in accordance with the Constitution. 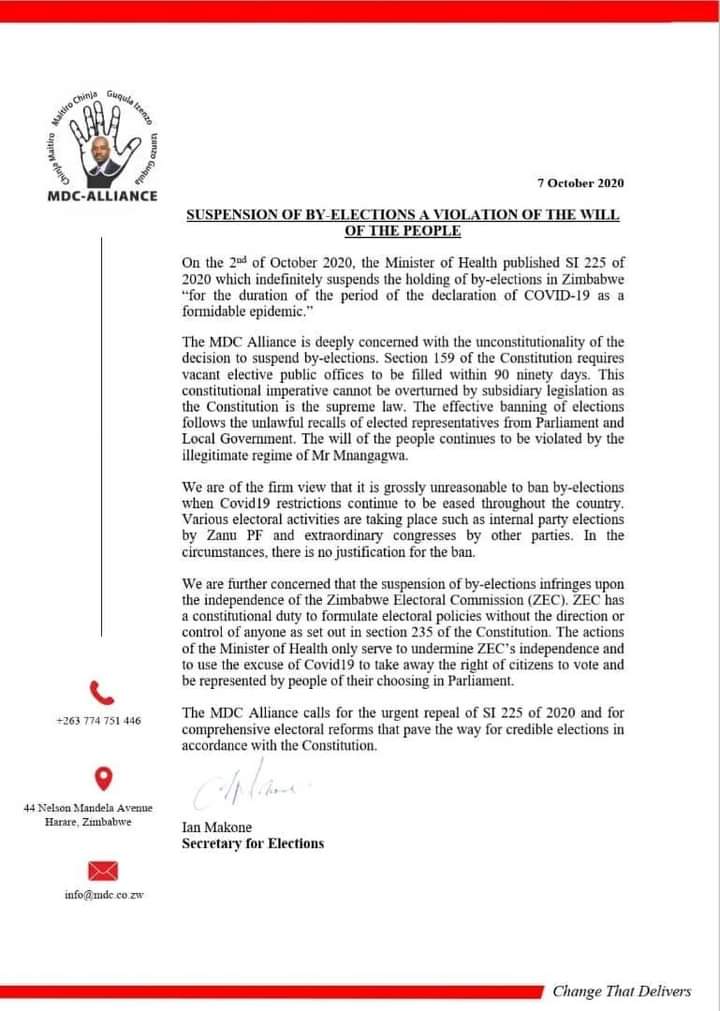 One Comment on “FULL TEXT: MDC Alliance Statement On The Suspension Of By-Elections”