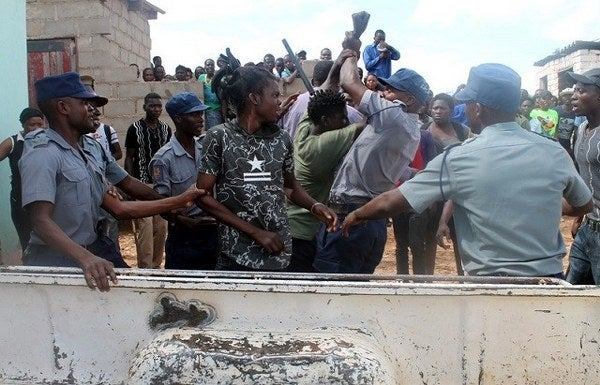 ZRP Rescues A Victim Of Mob Justice After An Angry Mob Attacks him. Zimbabwe

An angry mob reportedly attacked youths affiliated to Thokozani Khupe who wanted to take over the MDC Alliance offices in Kwekwe as the later armed with a court ruling has been taking over the former’s offices since July 2020, New Zimbabwe reports.

Violence reportedly erupted at the offices and the incident was confirmed by the party’s provincial chairperson Sekai Marashe who called the MDC T an extension of the ruling party Zanu PF and said:

It is true that youths aligned to Khupe stormed our offices in Kwekwe and wanted to violently take over the place,

The Zanu PF extension led by Douglas Mwonzora and Thokozani Khupe in the early hours of today (Saturday) besieged our offices in Newtown where our security officer, administrator, and three female leaders including our provincial chair were going through their business as usual and used violence to chase them from the offices.

They went straight to Kwekwe Central Police Station for assistance and the rebels stayed behind and vandalised our offices. Thankfully, the residents of Kwekwe who witnessed the incident chose to be responsible and defended the people’s offices from the criminals who ended up running for their lives after an angry mob confronted them and demanded answers as to why they chose the path of violence, thuggery, vandalism.

We urge Mwonzora and Khupe to shun violence and respect property rights and the laws of our country. We are currently getting medical assistance for our security officer who was attacked. In Kwekwe, the people are clear and they stand behind president Nelson Chamisa and his team as per their loud statement in 2018

The Police reportedly did not show up at the premises despite a report being made according to the publication which alleges that the clashes started when 15 MDC T youths and Redcliff Mayor Nyahsa Benza stormed the MDC Alliance offices and demanded the immediate evacuation of all MDC Alliance members.