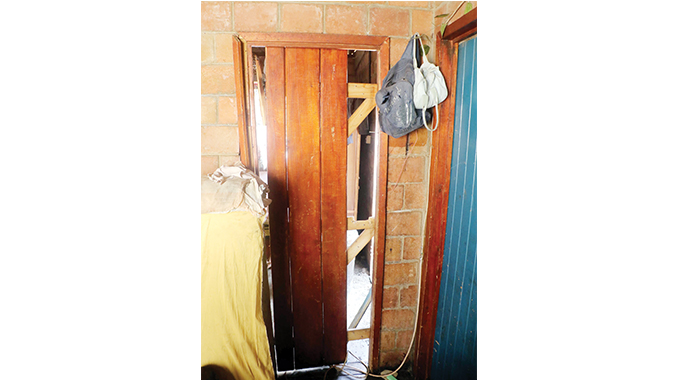 One of the damaged doors at a house raided by armed robbers in Emakhandeni suburb, Bulawayo

MDC Alliance councillor for Bulawayo’s Emakhandeni suburb Ward 11 Pilot Moyo said he was not avoiding discussing pertinent issues with residents after he exited from a WhatsApp group created by some residents in his ward.

Emakhandeni residents formed a WhatsApp group following a raid by a gang armed with machetes, axes and catapults which pounced on three houses accommodating individuals that sell wares and chickens in forex early this week.

The social media group was formed so that residents could liaise on how to map a way forward in preventing similar crimes from happening.

After Councillor Moyo allegedly exited the group telling residents that the MDC-Alliance does not allow him to discuss issues via WhatsApp platforms, the residents were left furious.

Moyo, however, said he exited from the group because he was added without being consulted and he didn’t know its purpose. He said:

They should have consulted me first before adding me to the group. They didn’t explain who they are and I just saw my number being added in a group. That is why I exited the group.

But I have visited the affected houses and today I made a follow up with the police who are investigating the case. No arrest has been made although police are following some leads.