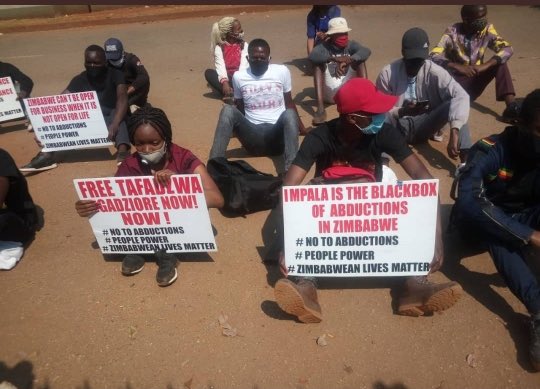 ZRP yesterday arrested 9 students who were protesting outside a Magistrate Court in Harare following the arrest of Takudzwa Ngadziore the ZINASU president who was arrested for protesting at Impala Car rental, ZimLive reports.

The police reportedly rounded up Nancy Njenge, Donald Marevanhema, Talent Jinga, Arnold Mazonde, Mitchell Lieto, Zvikomborero Mumbirimi, Takudzwa Gwaze and John Ncobo and reports say they were driven away in the back of a police vehicle.

Their lawyer Obey Shava said the group would sleep in police custody and they will appear in court today. The students are facing public disorder charges.

Meanwhile, Takudzwa Ngadziore was released on $2 000 bail 4 days after his arrest. Ngadziore was arrested for taking part in a demo that demanded Impala Car Rentals to release the details of the people who hired a vehicle that was used to abduct MSU student Tawanda Muchehiwa.