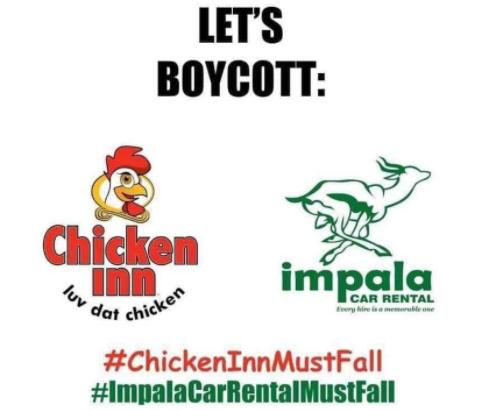 Zimbabweans have launched a campaign on Twitter branded #BoycottChickenIn #ChickenInnMustFall after a video that was played by ZBC that says a Chicken Inn manager told the investigators that he/she saw the 3 MDC Alliance who were abducted on the day in question during the time they were already reported missing.

Twimbos said Chicken Inn has a case to answer after it emerged their CCTV footage and name were used in the documentary that aired on ZBC TV. Here is what Zimbabweans on Twitter said about Chicken Inn:

The problem with Chicken Inn is not that it released CCTV footage, rather; that it availed it’s name and facilities in aid of a fraudulent effort. This immoral, unethical & completely senseless gesture is what has appalled right thinking people. Search your conscience Chicken Inn. You raise an issue with Chicken Inn and attract the ire of varakashi. Muridzi weChipopi tirikumuona zvedu. We are many things but foolish is not one of them

BOYCOTT CHICKEN INN They are colluding with the régime in the abduction and torture of innocent citizens. STOP BUYING FROM THEM #ZimbabweanLivesMatter

Makomborero Haruzivishe
We are simply appealing to your conscience & humanity to stop supporting those who are enabling abductions. Chicken Inn did not release any information,but they are enabling gross human rights abuses by their attempt to validate ZanuPf fake propaganda. #PeoplePower #FreeTakuNow

Dhara Blessed Mhlanga
It’s not a drive thru yet the@ChickenInnZW manager was kind enough to serve people from their car. How was he called to the car, why did he provide that special dispensation. I am keen to know.

Majaira Jairosi
It’s very sad that entities like@ChickenInnZW are used by ZanuPF & chubby faced louts like
@TafadzwaMugwadi to cover up abductions & to advance Zanu PF’s murder escapades. Like
@impalacarrental, Chicken Inn must also be condemned especially its manager who gave a false testimony

A few other individuals tried to defend Chicken Inn but Twimbos said they should have released a statement distancing themselves from the footage.