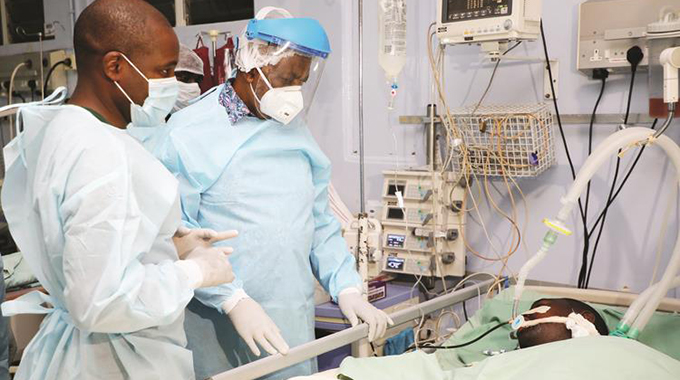 Vice President and Minister of Health and Childcare Dr Constantino Chiwenga and Dr Mutewaya assessing Corporal Peter Zvirevo who was shot by assailants in Chivhu on 05 September 2020.

Vice President Constantino Chiwenga, who is also the Minister of Health and Child Care, on Sunday night, visited two members of the Zimbabwe National Army (ZNA) who were injured following a shootout with two assailants in separate incidents in Chivhu.

Corporal Peter Zvirevo and Corporal Stanalious Chiunye were transferred to Harare for further management and are admitted at West End Hospital in Harare.

Corporal Zvirevo is critical and is admitted in the intensive care unit after undergoing an operation. He had a bullet lodged in the abdomen, while his kidney was shattered and was removed.  His spleen and liver that had been damaged were treated.

Corporal Chiunye was part of the army and police crack-team on an operation to arrest the two assailants when he was injured in a shootout with the duo that was eventually killed, 16km from Chivhu along the Chivhu-Gutu road.

Following his interaction with the injured at West End Hospital, VP Chiwenga said the two were in a stable condition. He said:

I am satisfied that the doctors have done the best they can. The operation on Zvirevo went on well.

VP Chiwenga also commended the security forces crack team that accounted for the assailants in less than 24 hours after the shootout.

He expressed his condolences to the family of Corporal Mupanganyama who was shot dead by the assailants at a police post in Chivhu on Saturday. Said Chiwenga:

We are really sorry about what happened. We lost a fine young man dedicated to his duty.
We lost a soldier who was doing his job, protecting people at a time we are fighting this invisible enemy, Covid-19.

He was not suspecting anything at all. What is good is that the two fugitives have been accounted for.