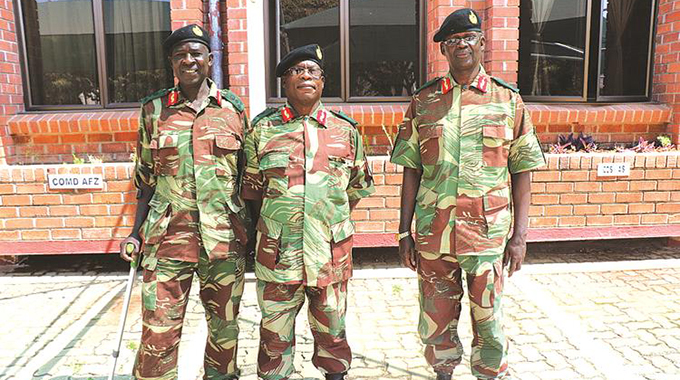 President Emmerson Mnangagwa on Friday promoted four colonels, who are all liberation war veterans, to the rank of Brigadier-General, six months prior to the date of their retirement.

The promotions are in line with a new policy that gives every ex-combatant who joined the Zimbabwe Defence Forces one jump in rank on retirement.

The officers who were conferred with new ranks are Brigadier Generals Rufus Chigudu, Edgar Dube, Units Gangata and Alexio Tafirenyika.

On behalf of the Commander Defence Forces, General Philip Valerio Sibanda, it is a great honour that I wish to congratulate you on your elevation to the ranks of Brigadier General.

The ceremony was delayed due to Covid-19 restrictions, but today we witness the honour of four hard-working loyal senior officers promoted to the rank of brigadier general six months prior to their dates of retirement.

His Excellency, the President and Commander-in-Chief of the Defence Forces has promoted you.

Lieutenant-General Chimonyo urged them to go and fit well into civilian life and focus on enhancing the country’s agrarian reform through working the land.

One Comment on “Four Army Colonels Promoted 6 Months Before Retirement”