The Heads of Mission of Canada, Germany, Netherlands, Norway, Poland, the United Kingdom, and the United States of America, have released the following statement which implored the Zimbabwean government to allow citizens to exercise their constitutional right to freely express themselves. The statement is coming after the government threatened, abducted, arrested and tortured people who were planning to protest the government’s maladministration.

Read the statement below:

The Heads of Mission of Canada, Germany, Netherlands, Norway, Poland, the United Kingdom, and the United States of America issue the following statement:

TWO years ago in his inaugural speech, President Mnangagwa vowed to serve the country and all of its people. It is in this spirit that the Heads of Mission express the, deep concern with the current political, economic, social, and health crisis that most Zimbabweans are facing today.

The Heads of Mission stand by the people of Zimbabwe in the, desire for a peaceful and prosperous democracy. It is because we care about the people of Zimbabwe that our govemments provide extensive humanitarian assistance to those affected by drought, natural disasters, and disease including, in this difficult year, the new global pandemic of COVID-19.

But COVID-19 must not be used as an excuse to restrict citizens’ fundamental freedorns. Freedom of the press, of opinion, of expression, and of assembly are all universally recognised human rights and are guaranteed by the Zimbabwean Constitution. The government also has a responsibility to investigate and prosecute those responsible for violating human rights.

The Heads of Mission further reiterate their calls for the govemment to address corruption and the illicit extraction of Zimbabwe’s wealth for personal gain, which continue to undermine Zimbabwe’s development and the well-being of its people. If Zimbabwe is to reach its potential, its wealth and resources must be used to serve all Zimbabweans.

Finally, the Zimbabwean people have the right to engage in dialogue to build a better future for their country. But the necessary discussions have so far been hindered by unhelpful rhetoric and blame assigned to several groups, including diplomatic missions and non-state actors. We ask the government to move away from such language and instead to deliver on its long-promised reforms and reach across the divides. Implemented to the benefit of all, they will make a difference to the life of all Zimbabweans.

We hope this government is able to deliver on its initial vision and five up to the commitments it made when it came to power. As before, we stand ready to provide support in response to meaningful progress on reforrns.
28 August 2020 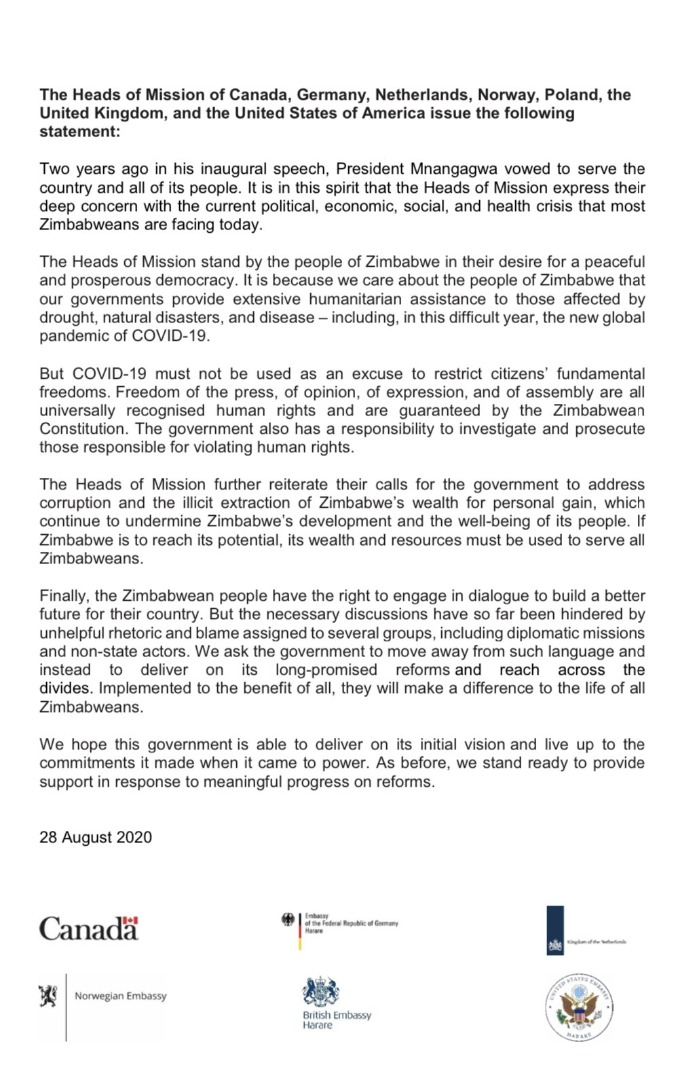