MDC-T interim Secretary General, Senator Douglas Mwonzora has said the 1980s massacres that were carried out by the 5th Brigade in Matebeleland and Midlands which are popularly known as Gukurahundi, were actually a genocide.

He also speaks after President Emmerson Mnangagwa recently met stakeholders from Matebeleland in an endeavour to address the issue that has lingered for years now.

Mwonzora speaks after a recent Facebook post in his name had teermed the massacres a civil war. Below is Mwonzora’s statement:

A recent Facebook post in my name loosely referred to the Gukurahundi genocide in a way that was open to various interpretations, including that it was a “civil war” where both the perpetrators and the victims could be viewed to have had an equal responsibility.

The casually worded post was interpreted by some to suggest that the actions of the government of the day was justified.

I wish to set the record straight in line with my publicly stated view, that Gukurahundi was in itself a genocide which targeted ethnically and culturally distinct communities for indiscriminate mass killings in order to achieve political goals. More than 20 000 such innocent victims in Matebeleland and Midlands lost their lives between 1983 and 1987. a dark period of our history which only ended with the Unity Accord of December 1987.

Whilst the loose wording of the post was unintentional and a genuine blind spot. I most heartily and unreservedly apologise for the insensitivity and inaccuracy of the same, seeing that it caused anguish and pain to some people.

May I also take this opportunity to reiterate the position I have articulated in my previous posts and interviews that the Gukurahundi genocide victims have to be compensated as pan of post conflict restorative justice which must include truth telling and reconciliation. 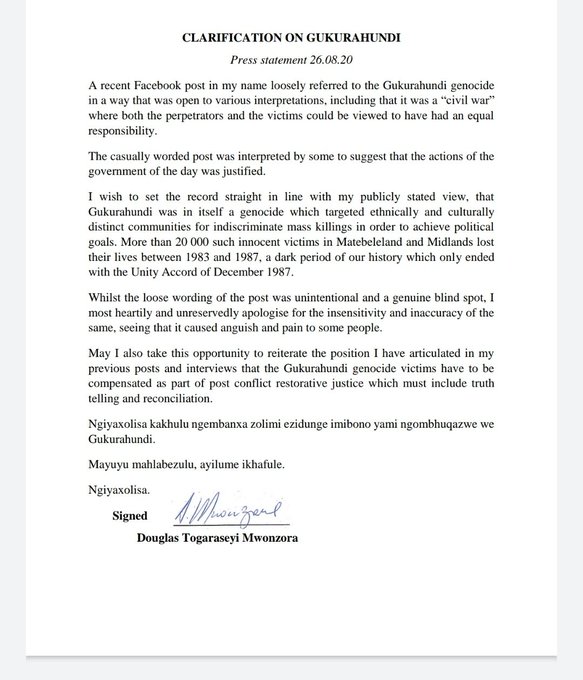